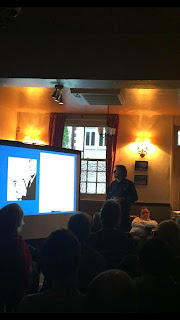 I've returned to Skeptics in the Pub Greenwich, see here for a report on the last time I went there: http://hpanwo-voice.blogspot.co.uk/2014/02/rob-brotherton-and-psychology-of.html. Once again I went incognito... just in case. I was accompanied by my friends Colin Woolford and Andrew Burlington, both UFO researchers, and I think we were the only non-Skeptics there. The speaker this time was Dr David Clarke, one of the country's best known UFO Skeptics. He is currently launching his new book, what he reckons will be his last book on UFO's, How UFO's Conquered the World, see: http://drdavidclarke.co.uk/. He teaches journalism at and often works alongside his sidekick Andy Roberts, see: http://hpanwo.blogspot.co.uk/2011/01/ufo-down-by-andy-roberts.html. Clarke says his new book is partly autobiographical and that he has had an interest in UFO's since childhood. He first heard about UFO's on the children's TV news programme John Craven's Newsround when there was a report on the Broad Haven incident, see: http://www.bbc.co.uk/news/uk-wales-18798867. He became an instant "buh-leeva!" in UFO's and wanted to know more about them. However when he watched Close Encounters of the Third Kind doubts emerged; this makes Clarke highly unique because he must be the only person on Earth to have been put off the subject by that film. In the case of Paola Harris, it deeply affected her entire life, see: http://hpanwo-radio.blogspot.co.uk/2014/01/programme-74-podcast-paola-leopizzi.html. He also realized that news reports on UFO's seemed to match whatever science fiction was on TV or in the cinema at the time. In the case of Broad Haven, the children saw a vision that resembled what had been on Doctor Who the previous evening. Clarke didn't mention this in his talk, but a very similar explanation exits for the Livingston incident of 1979 in which a forester called Robert Taylor was walking through the woods in Livingston, Scotland came across a strange craft, see: http://www.ufoevidence.org/Cases/CaseSubarticle.asp?ID=684; I don't know if Clarke explicitly endorses this theory. Either way, from there it was a downhill run to . Nevertheless his dismissal of the UFO extraterrestrial hypothesis did not come with a loss of interest in the subject. He continued to study UFO's and read books on them, seeing them instead as a piece of modern folklore rather than something objectively real. He became interested in the ideas of John Keel, one of the most innovative UFOlogists ever, and Carl Jung the psychoanalyst; this led Clarke to his psychological and cultural theories of UFO's, that they are essentially a 20th century mythology. He calls it his "psycho-social hypothesis". It began in the 1940's and the first recorded media reference of UFO's as extraterrestrial spacecraft was in June 1947 in the United States of America when the pilot Kenneth Arnold reported seeing strange objects while flying near Mount Rainier in the Cascade Mountains; he was misquoted by the press as describing them like "saucers" and the term flying saucer was coined. The remains the world's cornerstone of UFO awareness to this day. The idea of alien abduction was popularized by Betty and Barney Hill in 1961, and this is where the archetypal "grey" alien came into public consciousness; however my friend Colin pointed out that Clarke contradicted himself later on when he claimed that the "grey" was first seen in a science fiction story by HG Wells published in the 1890's. Clarke's involvement with the government's Ministry of Defence UFO desk and their record files in the National Archives led him to some remarkable discoveries, for instance the levels of UFO sightings reports rise and fall considerably, and he showed us a graph of them. There are distinct peaks in the years 1977 and 1995 which Clarke puts down to the release of Close Encounters and the Alien Autopsy film respectively.

As regular HPANWO-readers will guess, I disagree with almost everything Dr David Clarke said in that lecture. He talked about "UFO believers" and "they will believe anything instead of a rational explanation". He referred to the Roswell Slides which were released the previous evening, see: http://hpanwo-voice.blogspot.co.uk/2015/05/roswell-slides-day.html (Don't worry, I will be making a full statement on this matter very soon; keep an eye on the HPANWO TV blog, see links column). But Clarke is a believer too, whether he likes it or not; a believer in UFO's not being ET. He may deny it, like many Skeptics do, but his position is as ideological as anybody else's, and he exposes himself with his use of language. A "believer" under his definition means somebody who thinks UFO's are an objectively extant phenomenon; conversely a "rational explanation" is a statement that the UFO's do not exist and are all hoaxes, delusions, folklore etc. Do you see what's wrong with that? It means that a serious scientist who has concluded using the empirical scientific method that a UFO incident is a reality, is judged to be a "believer" in the same way a member of a religious cult is a believer in their deity or messianic leader. Conversely you might encounter somebody who knows nothing about science and never uses its methods but who says about the same incident: "Ya wot? Nah, mate. There ain't no such things as UFO's. It's all in yer head, innit?" Then he would be congratulated for providing a rational explanation for said incident. You see? This is very important to understand; Skeptics, no less UFO Skeptics, have a very faulty judgement of themselves, see here for more details: http://hpanwo-voice.blogspot.co.uk/2014/12/trystan-swale-on-ben-emlyn-jones.html. Another good example came when Clarke talked about "Occam's Razor". This is a problem-solving method which directs you to always consider the most likely explanation first. So, for example, if your radio stops working the most likely cause is that the batteries have simply gone flat; so change the batteries first before opening it up and fiddling with its wires. But Occam's Razor only works within a sphere of understanding that already exists; we already know how a radio works, that's why we can apply Occam's Razor to it. Therefore it's inappropriate to apply it the way Clarke did to the 2008 helicopter incident at RAF St Athan, see: http://news.bbc.co.uk/1/hi/wales/7465041.stm. Clarke claims that it is more likely that this was caused by Chinese lanterns, those beloved blessings for UFO Skeptics! He found a report that some people in launched some of them during a wedding reception and one of the guests related that they saw a police helicopter hovering near one of them. However Occam's Razor in this case is a double-edged sword because I could just as easily use it to say: "Which is more likely? That highly trained police helicopter pilots were fooled by a paper balloon with a candle inside... or there is still a genuine mystery here." and there would be no answer to that; both sides' positions are equally unfalsifiable. Clarke makes some distinct factual errors too. Near the end of his speech he said: "Why is it that when UFO's crash, they always seem to crash in the , never anywhere else." That's not true, see: http://hpanwo.blogspot.co.uk/2015/01/area-51-alien-interview-new-research.html. In truth, UFO's did not begin in the 1940's; people have been reporting them for as long as they could do so without being burnt at the stake for witchcraft. The same goes for alien contact; it can be traced back through all history and probably happened regularly in prehistoric times. People didn't called them "aliens" in those days; they described them as goblins, trolls and fairies, but their contact experiences were identical. The world's first UFO report is probably the author of the Book of Ezekiel in the bible which was written over two thousand years ago. Renaissance paintings show flying saucers in them and grey aliens can be seen in cave art from the stone age ten or even twenty thousand years BC. Millions of people have seen UFO's from all over the world, they always have; these are sane people, often whole groups of them. Entire towns and cities have had experiences. Witnesses include senior politicians, pilots, high-ranking military officers and astronauts. If UFO's can all be explained away as a "psycho-social hypothesis" or "folklore", then so can sparrows, Boeing 747's and frisbees. Dr David Clarke ended his address with a slide of the famous X-Files slogan: "I want to believe!" Well so does he.
Posted by Ben Emlyn-Jones at 18:21