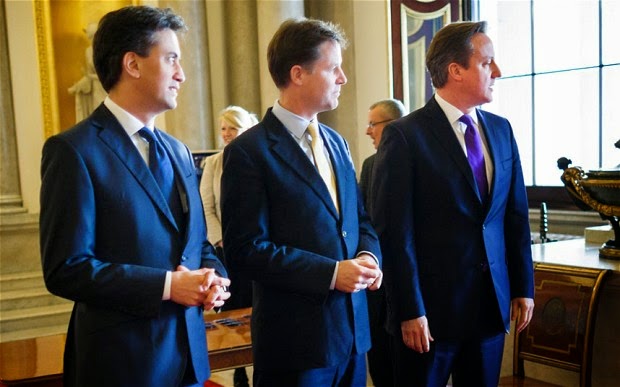 The leaders of the government and opposition parties have all given a New Year address to the nation. This represents the unofficial starting gun shot for the coming general election on the 7th of May. The Prime Minister David Cameron is filmed in a busy workshop or factory with machinery behind him and engineers busy at work. He explains how his own plans for repairing the economy are working and warns people about voting for anything other than Conservative because it would derail the recovery and return the nation into chaos, see: http://www.bbc.co.uk/news/uk-politics-30645707. Nick Clegg, leader of the Liberal Democrats and deputy Prime Minister is filmed in his home with a Christmas tree in the background. He says that a choice between Tory and Labour is a grim decision. A Labour government will ruin the economic recovery and a Conservative majority government will only look after their own, rich people. So why not support real change by voting LibDem? It will give you both a stronger economy and a fairer society, see: http://www.bbc.co.uk/news/uk-politics-30623654. The leader of the Opposition Ed Miliband laments about poverty, debt and inefficient public services of the nation today. He says needs a new beginning, a new plan for recovery and prosperity. Miliband also has the backdrop of a Christmas tree, indicating that he is in his home, see: http://www.bbc.co.uk/news/uk-30639727. I am not fooled for a moment by this array of sophistry and public relations trickery; I'm sure I am not alone. The use of background is very important in these kinds of schemes. Our subconscious mind sees the fearless leader facing us in his smart suit, while healthy copious industry rumbles away behind him. The men in the workshop are "right behind" the Prime Minister, literally as well as metaphorically. For Clegg and Miliband it's the family man routine, the open collar, Christmas trees behind them; you can imagine the wife and kids gathered round. Top psychologists are used to produce these kinds of films, straight out of the Tavistock Institute and Fabian Society, of which Miliband is the current chairman. In fact all of those three men you've just seen have been involved in the various fifth column covert or quasi-covert world of organizations like the Fabians or the Bilderberg Group, see: http://hpanwo-tv.blogspot.co.uk/2013/06/bilderberg-2013.html. We're looking at a one-party state here; it's all a huge confidence trick. Of course there are the second tier parties like the BNP, Greens, UKIP etc. UKIP are really no longer second tier but are confidently stepping up onto the top of the pile. After their success in the European Elections they plan to contest every seat in the General Election and will almost certainly win a few of them at the expense of all the main parties. Some of what they stand for sounds very progressive, an exit from the EU etc; but how independent are they really? How long will it be before Nigel Farage is invited to a Bilderberg Group conference? If he's invited will he say no? See here for more details: http://hpanwo-voice.blogspot.co.uk/2014/05/the-ukip-revolution.html. A new anti-political movement has been started by a fellow anti-New World Order activist Danny Bamping, "None of the Above". It's intended to be a paradoxical satire on the fraud of post-democracy; unfortunately the electoral commission are doing their best to shut it down, see: http://notavote.co.uk/. I think NOTA a great way of illustrating the LibLabCon secret one-party state charade. I've said it before and I'll say it again; there's only one way we can bring in real change, real freedom and real improvement to this world. We have to address the issues I raise here and expose them to as many people as we can.
I'd like to wish all HPANWO readers a very Happy New Year!
Posted by Ben Emlyn-Jones at 18:37