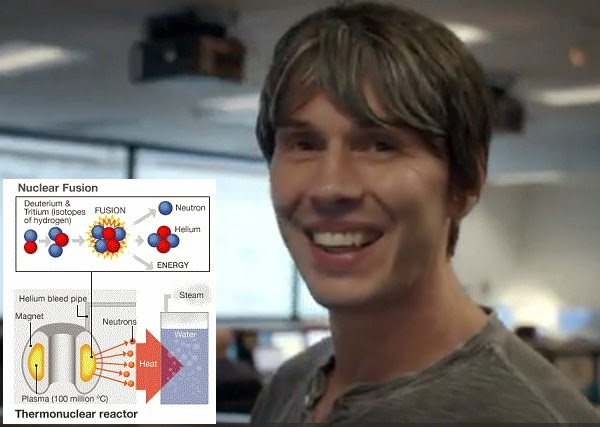 I've come across an article, thanks to my friend and fellow researcher Heidi King, which is a review of an episode of the BBC TV series The Human Universe. This is presented by... of course!... Prof. Brian Cox. It's currently available on BBCi Player: http://www.bbc.co.uk/iplayer/episode/b00hr6bk/horizon-20082009-10-star-on-earth. I've not seen the episode yet, but was interested to read what the critic said; this is Dave Darby writing for the environmental website LowImpact.org. It takes the form of an open letter to Prof. Cox. It is extremely revealing about the environmental movement. The author wishes to comment on two points Cox made, about democracy and nuclear fusion. Nuclear fusion is a subject I've covered before and it is an experimental method of energy generation through fusing hydrogen nuclei, as opposed to nuclear fission which is the splitting of uranium nuclei. Fusion is said to have advantages over fission because it is cleaner and safer, see: http://hpanwo-tv.blogspot.co.uk/2013/04/return-to-culham.html. Dave Darby quite rightly points out Cox' rather naive pronouncements on democracy and explains that the real power lies with a superclass; as regular HPANWO readers know, that's what I'm always saying too. However the really remarkable bit in when Darby goes on to give his views on nuclear fusion. Like many greens, with a lowercase G and a capital one, he laments about the length of time it's taking to develop the process. Cox has pointed out that fusion "works!" yet the enormous engineering challenges have made many feel doubtful because of the extremely long delay for it. The scale and urgency of the Earth's energy problems, whether real or perceived, mean that fusion is seen as effectively useless. This is an argument I'm familiar with; however the next thing Darby says is almost without precedent. He claims that the advent of useable and widespread nuclear fusion power could threaten democracy and degrade the environment. That's a new one on me. See: http://www.lowimpact.org/why-brian-cox-is-wrong-about-nuclear-fusion/.

Dave Darby says that by introducing nuclear fusion into the world as it is, humanity will suddenly have access to far more energy than ever before and this will generate massive economic growth, which will mean more human activity like road-building, holiday resorts, cars, mines, second homes and factories etc. This will cause even more displacement of nature than that which it currently suffers. This is completely at odds with a most of the current environmentalist rhetoric which focuses almost exclusively on the problem of Carbon™ emissions and climate change. If we can get those licked, so they say, we home and dry, see: http://hpanwo-voice.blogspot.co.uk/2015/01/2015-and-climate-change.html. The only other ecologist I've heard utter the same position as Darby is Erik Pianka, the great depopulator. He is so misanthropic that he calls Homo sapiens "Homo saps!" and thinks that we shouldn't have nuclear fusion because we'd just use it to level mountains, see: http://hpanwo-tv.blogspot.co.uk/2011/01/erik-pianka-and-overpopulation.html. Darby says that nuclear fusion would only be safe in the hands of a "steady state" economy, one based on zero growth; this would be an economy managed to stay "within nature’s limits". He says: "The introduction of fusion into an economy whose only purpose seems to be to increase in size could be a very different, and dangerous matter." Darby then goes on to talk about some other issues that I agree with him on, like fusion energy being taken over by a few mega corporations, as if that isn't already the case with fossil fuels. He's also an opponent of GMO's in an age where major environmental spokesmen are being foolishly seduced by the idea, like Mark Lynas, see: http://hpanwo-voice.blogspot.co.uk/2013/11/rothamsted-update.html. He also attempts to dampen Prof. Cox' ardour for space exploration, not least because rockets are very environmentally unfriendly. However he also feels we need to get our own house in order first before heading out to mess up other planets. What amazes me about Dave Darby's letter to Cox is that fact that he is effectively confessing something that few ecologists do, an open call for global deindustrialization. This means a reversal of the industrial revolution and a return to agrarian society, small scale production, generating electricity locally and organizing politically on a small scale. To be fair, I'm drawn to some aspects of that model; however it is a theory with a dark and light side. The end of the New World Order and the dawn of the post-Illuminati era will inevitably mean a slowdown and eventual halt of many mass centralized industries, simply because they're caused by pathological consumerism. This process will happen naturally; the same goes for decentralizing power. However a very superficially similar model is also proposed by the supporters of that very New World Order; a perverted and warped version of it in which a greatly reduced human population exists under the complete control of a global tyranny with a planned resource-based economy. This is actually a very extreme form of communism. The removal of unnatural and malevolent government in itself will be enough to prevent the nightmare Darby fears. Humans are social creatures and we will regulate our own activity naturally, if left to our own devices. Therefore I warn Dave Darby not to become harnessed to the various movements which use people's fear of ecological destruction to fool them into taking part in a scheme for a globalist dictatorship, the Club of Rome, Agenda 21 etc. As for Prof. Brian Cox, he will allow himself to be used for whatever propaganda the producers of his TV shows want, see here for more details: http://hpanwo-voice.blogspot.co.uk/2013/09/prof-brian-cox-watch-this-space.html. This issue has got me thinking. I've talked a lot before about a plan to suppress free energy; is it possible that some people behind that conspiracy are environmentalists like Dave Darby? Sure I know nuclear fusion is not technically free energy, but it is very similar in that it will greatly increase energy output with none of the costs and practical concerns of the fossil fuel infrastructure. Their fears of free energy could be similar to Darby's fears of a world run on nuclear fusion. See here for more details: http://hpanwo-tv.blogspot.co.uk/2014/05/ben-emlyn-jones-live-at-bufog.html.
Posted by Ben Emlyn-Jones at 18:57

Hi Ben,
Thanks for this post. As if by magic, what should we find currently re-playing on BBCi player but
http://www.bbc.co.uk/iplayer/episode/b00hr6bk/horizon-20082009-10-star-on-earth
Although I was familiar with the history of the science of 'hot' fusion, I decided to overcome my gag reflex and watch this. I was quite awe-struck by the scale of these engineering projects that have become a global puppet-show and money-hoover. It was interesting to see that, at the time ('08-'09), many of the lead scientists were optimistic of producing excess heat by 2011. Oops! At the conclusion, most were envisioning success by around 2025 to 2035. Just as with the search for a cure for cancer, the scientists need more money and time! Still the photography and music was lovely and Brian looked radiant as ever, so that's ok then! There was no single mention of low energy nuclear reactions having produced excess heat at any time, so all is well with the world and Brian has served his gate-keeping purpose well. What do you think Ben? If we all had safe, independent, off-grid low energy nuclear fusion devices powering our own homes, would society collapse?

Thanks, Neil. I've inserted the link into the article. I myself was impressed by my visit to the CCFE, but that cost billions over the 35 years. It's been around. ITER is going to lap up 18 billion by the time it's ready. And useable fusion is always 20 years in the future whenever you are! I think it's just a way of the PTB's to kick the can further down the road while pretending their going to pick it up and put it in the bin eventually.

Hello again Ben,
As luck would have it I listened to http://www.mindsetcentral.com/archives/15094 today. 50% on the way to work, 50% on the way home. As you stated, the subject of UFO disclosure is linked inextricably with the reality of free energy on earth, and I identified with your candour with regard to this topic.
In my opinion you should continue to think positively and regard disclosure as an inevitability that will occur during the next generation. This is no self-indulgent fantasy. Hold to your conviction; it has served you so well thus far and will continue to do so!

Thanks, Neil. Glad you like The Poker. I'm going to stick with it. I feel hope and I hope I can instill that in others :-) I appreciate your support