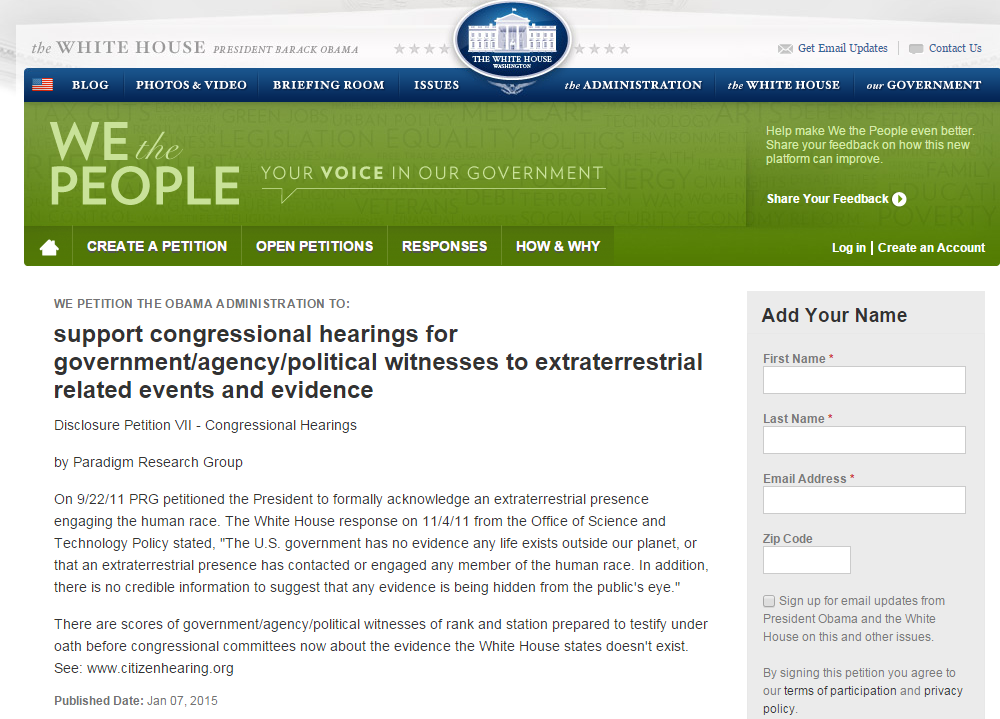 Disclosure Petition VII is now open. This is the seventh petition to the We the People service at the White House website relating to the Disclosure of an extraterrestrial presence engaging the human race. The We the People service allows American citizens to set up petitions for a cause of their choosing with a target number of signatures; if they reach their target then the President's office has to respond. The first Disclosure Petition in 2011 reached its target of five thousand signatures in thirty days and so the administration obeyed its own rules and issued a formal response; it was short and simple: "Thank you for signing the petition asking the Obama Administration to acknowledge an extraterrestrial presence here on Earth. The government has no evidence that any life exists outside our planet, or that an extraterrestrial presence has contacted or engaged any member of the human race. In addition, there is no credible information to suggest that any evidence is being hidden from the public's eye." This was the first public statement on UFO's made by the US Government since the closure of Project Blue Book in 1969, see: http://badufos.blogspot.co.uk/2011/11/white-house-replies-to-disclosure.html. It's an important legal foundation to build on. More Disclosure Petitions followed which failed to reach their targets; this is suspicious because We the People raised the limit bar after the first one and also several people, including me, noticed that their signatures were mysteriously vanishing, see: http://hpanwo-tv.blogspot.co.uk/2012/05/what-happened-to-disclosure-petition-ii.html. 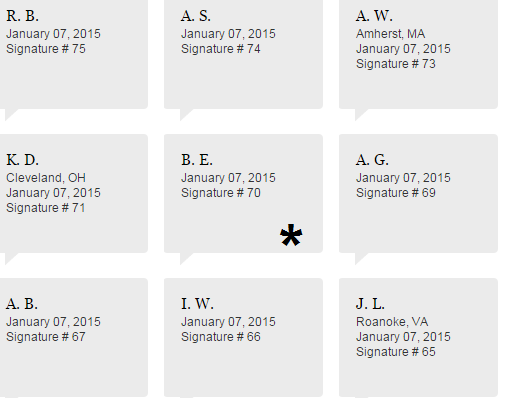 The objective of Disclosure Petition VII is to promote the Congressional Hearing Initiative. The legal basis is a challenge to the first Petition reply from the White House which we know is a complete lie and can prove it in a fair and open, formal Congressional hearing, see background links below. As the Paradigm Research Group states: "There are scores of government/agency/political witnesses of rank and station prepared to testify under oath before congressional committees now about the evidence the White House states doesn't exist. See: www.citizenhearing.org" I ask all HPANWO readers to sign as soon as possible. The target is 100,000 names within one month: https://petitions.whitehouse.gov/petition/support-congressional-hearings-governmentagencypolitical-witnesses-extraterrestrial-related-events/zYx1VkvD. After you've signed, find your signature and make a note of the number; mine is 70, as you can see above. Keep checking back to make sure it's still there, especially as we approach the deadline. Thank you.
See here for more information: http://hpanwo-tv.blogspot.co.uk/2014/12/ufo-disclosure-2015-happy-new-year-last.html.
And: http://hpanwo-radio.blogspot.co.uk/2014/11/programme-113-podcast-stephen-bassett.html.
And: http://hpanwo-voice.blogspot.co.uk/2014/11/et-disclosure-make-it-rain.html.
Posted by Ben Emlyn-Jones at 16:13

Thanks for this, Ben. Let's hope that this petition-call gathers momentum as it gains publicity within the global alternative media. I know I will be asking everyone that I know to sign, even those who I suspect think that I'm a nut bar! I don't care; I'll even go for the sympathy vote if it gets a signature :-) Although we're off to a reasonable start at 3000ish in 24 hours this obviously needs to be maintained to garner 100K signatures in 30 days. Let's get everyone to reach out on their social media/email,family, friends etc. After all, anyone who adds their name to this has absolutely nothing to lose and potentially a far better life for all on earth to gain. Explained in those terms, that has to be far more meaningful than, say, buying a lottery ticket on Saturday. And, probably, the odds are more favourable!