Uniforms for the Unemployed 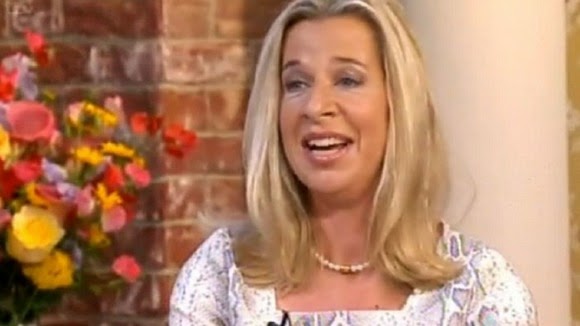 During the last couple of days I have been consumed by a depraved fantasy; omitting details I shall merely say that it involves Katie Hopkins and a pineapple. The bumptious little commentator has done it again big time with her recent proposition that there should be a uniform for unemployed people. What she's suggested is in fact something I predicted long ago; I said there would be a return to chain gang-like service units who would wear a special uniform to identify them. Katie Hopkins stated on Twitter that it's because she wants the unemployed to "fit in at the Job Centre". This latest outburst is fairly typical of her career as a pundit; here she is debating with Sonia Poulton, a woman whose shoes she's not fit to clean in my view, see: https://www.youtube.com/watch?v=YLvrZBdHXXQ. She has also said that she would not let her children be friends with a child named Chardonnay or because of its connotation with the working classes and culture. She is an unrepentant snob, an insular bigot and I consider her to be one of the most ignorant and obnoxious people in the media today; she is 's Ann Coulter. What's more, I get the feeling that she's well aware of this and rather enjoys her notoriety; she even cultivates it. Her path to fame was fairly textbook for a popular social polemicist too; she was a contestant on The Apprentice and then I'm a Celebrity- Get me Out of Here! Reality TV is a major part of the media's mind control agenda and I've discussed this before here: http://hpanwo.blogspot.co.uk/2007/11/reality-tv.html. It's curious that her original career choice was that of an army intelligence officer. She was in the middle of training at the military academy when she was discharged because she suffers from epilepsy. I can't help wondering if she really was.

I've said many times now that the biggest bait in the trap for falsely justifying the New World Order conspiracy is the unemployed; in fact they've even overtaken the Muslims.
See here for background: http://hpanwo-voice.blogspot.co.uk/2013/09/tory-boy-wants-more-slaves.html.
And: http://hpanwo-voice.blogspot.co.uk/2013/10/on-benefits-and-proud.html.
And: http://hpanwo-tv.blogspot.co.uk/2011/04/get-job-you-lazy-scroungers.html.
The rage being artificially embedded in the pubic conscience towards unemployed people is terrifying; and it's all being done by psychological experts who have almost a century's experience in manipulating the human mind, on an individual, cultural and collective level. These psychologists are working in our media today; in television, the cinema and in the newspapers, including those Katie Hopkins has written for. All kinds of fundamental changes are emerging in society that were unthinkable a few years ago; indeed, as I explain the background articles, some of them were tried out long ago and failed. They failed because of public rejection. At the end of the day, the governments can't force us to do anything, they can only make us think and feel a particular way so that we do their bidding willingly. Katie Hopkins and others like her are vital ingredients in this project. However, the project will never work if we, the people get to grips with the fact that we're being manipulated and fight back against it. Sadly some of ' Twitter followers agreed with her. One said that an unemployment uniform already exists, it's: "low-slung jeans, hoodie top, tattoos and fag and can of Stella." Another smirked: "You can't make the lazy unemployed leave their homes everyday, the local super booze will all go bankrupt! Think of the economy." However, as with On Benefits and Proud, see link above, plenty of people now see through the flannel and are not willing to let their consent be engineered.
("The engineering of consent" is a phrase coined by Edward L Bernays and I cannot recommended too highly this remarkable documentary about media mind control: http://vimeo.com/67977038)
Source: http://www.closeronline.co.uk/2014/04/katie-hopkins-it-s-time-we-issued-an-unemployed-person-s-uniform.
Posted by Ben Emlyn-Jones at 16:47

this woman is just another psyop shill propped up plant of the nwo, to inject the nwo neuro science linguistics stereotypes into the sleeping masses minds watching this morning tv brainwash.. shes stupid enough to do it for free as well no doubt.. so just another wel coordinated attack on the minds of tv watchers..

Well at least the idea is out there now. We all know these kinds of thoughts rattle around the minds of credulous, unphilosophical News zombies. At least now it's been said and it's been said with no subtlety or sophistication. We can be confident that there's still a significant number ready to fight these ideas while they're flagrant.

It's when these things aren't said that you need to start worrying! Take the positive from the general reaction to this pantomime villian; She has probably just delayed a piece of covert legislation by a few months with her loud mouth.

And while I don't think Katie Hopkins is much more than a harmless idiot, there are plenty of others less fame-hungry and more clandestine who are sympathetic to her ideas: People who would not be so stupid as to publish them.

I know what you guys are saying. Katie Hopkins is basically after attention and controversy I reckon. If she needs to be a bitch to do it, she'll be a bitch. She's like Christopher Hitchens without the brains.

Coulter is certainly a snob, as proven in the book, Vanity: Ann Coulter’s Quest for Glory, available at www.coulterwatch.com/vanity.pdf.

I'm quite content for people like Katie Hopkins to spread their (bosses?) message in the MSM. She is such an obnoxious individual that even the most stupid, most fast asleep people are likely to turn against the brainwashing if this is the best that our controllers can do.

The time to worry is when far more apparently empathetic and reasonable celebrities begin preaching the same doctrine. As long as it's confined to obviously nasty people like her, then that's OK by me.

Well said anon (1st May). Control freakery succeeds when it is wrongly attributed to compassion (or necessity).

This would be her first priority if she was anything more than a self-promoter with opinions for cash.