On Benefits and Proud 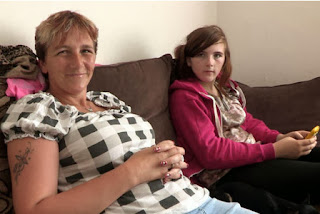 See here for a recording of On Benefits and Proud: http://www.channel5.com/shows/on-benefits-proud/episodes/on-benefits-proud. (This link might only be live for a limited time; if a more permanent link becomes available I'll edit it in; keep checking back.)

Many people have said, and I agree, that the quality of television has declined over recent years. However this statement has become something of a nondescript cliche which is uttered in the same way people talk about the weather; it's rarely explored or defined. Hardly ever do TV viewers ask why, when there are more technological innovations, financial resources and skills in television production than ever before. It should make us very worried, especially when we realize that although any TV programme can be bad, there is a limit to how bad it can be by accident. I made this point a couple of months ago over Confessions of an Alien Abductee, see: http://hpanwo-tv.blogspot.co.uk/2013/06/confessions-of-alien-abductee-aftermath.html. It applies just as much to this latest waste of cathode rays.

When I first switched it on I assumed it was some kind of low-budget farcical comedy, but no, it is a documentary. It centres on the lives of a group of young women who have many children and live very expensive lives paid for by the Welfare State. One of them is Heather Frost, a recent tabloid star, see the picture above, and she has eleven children from adult age to small babies; she is thirty-eight and had her first baby as a fourteen year old girl. Her brood has three different fathers. One of the link shots of the programme is a scene of all her kids playing in an extra-large paddling pool. "It ain't against the fuckin' law to have eleven kids is it?" she drawls; maybe giving us ideas there! The programme opens with the statement: "Supporting people on benefits costs the country forty billion pounds a year!" and on three occasions they tell the viewer that Ms Frost's benefits add up to the equivalent of a £60,000 p.a. salary. It's odd that Channel 5 haven't made a programme about the Bank Bailout which cost the tax payer £3.8 trillion, that's the entire 's Welfare budget for almost a century... but strangely the voices of enraged indignation go silent at that news. These "Welfare Queens" are inarticulate, foul-mouthed, physically overweight and extravagant in their tastes. They're filmed extracting large wads of cash from the bank and travelling around town from manicurists, to clothes shops, to pubs, to burger bars. The camera closes up on their opulence, jewellery, cable TV boxes, packets of cigarettes and cans of beer; and the cherry on the cake, the Frost's half million pound house 100% funded by Housing Benefit. Most scenes in their homes show one or more of them eating. Their menfolk are similar, very clownish and obtuse. One of them is filmed in several scenes lying on a couch. One of the shots cleverly shows him sitting reclined on the coach from a low angle, emphasizing the bulk of his lower body and therefore making him look like a generic "couch potato". After their shopping sprees the family go home to eat, drink and make merry while their overfilled shopping bags tip out onto the kitchen floor.

This entire light-hearted slice of life has a dark and acidic undertone that is intended to make the viewers' blood boil. The UK Government is currently on a project to dismantle the Welfare State, force the unemployed onto civic labour schemes and make life generally as uncomfortable as possible for anybody receiving benefits, see here for background: http://hpanwo-voice.blogspot.co.uk/2013/09/tory-boy-wants-more-slaves.html. The falsehood is being promoted that unemployment is a "lifestyle choice" rather than a national disaster caused simply by a lack of jobs, something that very few people indeed wish for. But when the Government is trying to raise public support for its scheme, will said public be thinking of the queues of miserable people outside the Job Centre Plus being interrogated by staff trained to be mentally abusive? Will they be thinking of the hundreds of thousands of families living off food stamps and picking up grocery boxes from the Red Cross? No, they'll be thinking of what they saw on TV, where they get most of what passes for information. They'll be thinking of Ms Frost and her accomplices featured in that programme, wrongly thinking that every town has a huge underclass of Heather Frosts bleeding "respectable taxpaying citizens" dry. In truth, Heather Frost and the others are virtually freak cases which have been filmed very selectively to portray them in a prearranged way. This is exactly what they did to Chantelle Pyper, Simon Parkes and the other "stars" of Confessions, following them around with a camera for two weeks and then editing it down to ten minutes of footage which presents the subject in a chosen light. A skilled TV programme maker can do that kind of thing to anybody if they know how. The question only remains: has the great British public enough intelligence to see through this revolting and spiteful propaganda hit piece, or are they just going to believe it and fall into line like their masters demand. Time will tell, but the comments under the video are cause for encouragement.
Posted by Ben Emlyn-Jones at 15:15