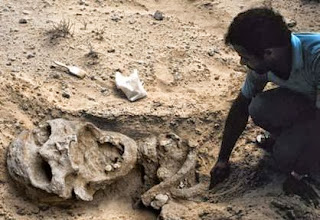 Iraqi archaeologists have reported that they've uncovered the bones of giants. The skeletons of four males were dug up in the Kalar district, south of the city of in . They have not been formally dated yet, but they're said to be several thousand years old. The notoriety for this find however relates to the height of the specimens; it's been calculated that they would have stood over ten feet tall. This puts them more than 1 foot 1 inch taller than the most extreme confirmed and living case of human giantism, Robert P Wadlow of (1918 - 1940), see: http://en.wikipedia.org/wiki/Robert_Wadlow. The archaeologists revealed to the press that they'd discovered the skeletons in July 2012 and Nexus magazine published the story in August of this year. Mohammed Ali (not the boxer) of the Garmyan Archaeology Department said that they had been digging for six weeks before they unearthed the bones in the Rahim Hills area of Kalar; when they saw the size of them these trained and experienced experts couldn't believe their eyes. The bodies had been deliberately buried in deepset graves and beside them were jars dated to about 4500 BC. Dr Ali sent photographs of the find to colleagues in , and the .

The source Nexus gives for the story is a media outlet called AK News however the actual page URL reference gives us this: http://www.aknews.com/en/aknews/1/317590/ . The site has been taken down since the article was written. Skeptics will no doubt claim that the entire scoop is a hoax and that AK News does not exist (a bit like James Randi's "WOOP Radio", see: https://www.youtube.com/watch?v=jksKtGoz3og). But it does exist... or rather it did, see: http://www.ekurd.net/mismas/articles/misc2012/9/state6528.htm. This article says that AK News had to shut down due to "financial burden", but it's odd that this shutdown took place just two months after publishing the report by Dr Ali's team. Is this a cover-up I see before me? Today the only online reference to the story is here: http://shallroar.com/ADAM%20&%20EVE%20IN%20THE%20LAND%20OF%20GIANTS.html. Its theme is very Christian and Biblical, something I do not endorse at all, but a lot of the information it gives is highly interesting. As you can see this is not the first time that human remains of extraordinary size have been found. Bones have been discovered of people even bigger than the Kalar giants; in fact the biggest specimen reported in an astonishing thirty-six feet high, which puts this individual in the league of fairy tale characters; "Fee-fi-fo-fum" etc! Not only the bones of giants have been found, but artificial utensils built to scale, like the axes shown in the photo on the page above. I've also come across a report of an enormous hammer being encountered. I read this in Michael Cremo's book Forbidden Archaeology; sorry, I can't find a proper online reference. The hammer is far too big and heavy for even the strongest normal-sized man to wield and was found in the ancient copper mine at Great Orme in north , one of the most mysterious and unexplored places on Earth, see: http://www.greatormemines.info/. Were there really people of a far bigger size long ago? There's a line in the Bible about it "There were giants in the earth in those days" (Gen. 6:4). There are many accepted and conclusive discoveries of animals of other species existing in a far larger size in the past, like the giant shark Megalodon, see: http://en.wikipedia.org/wiki/Megalodon. There are even regions of the world where giants are rumoured to be still alive today, like the , see: http://www.solomonislandsmysteries.com/SOLOMON_ISLANDS_MYSTERIES/Welcome.html. If there are... or even were... giants walking the planet and evidence has been found of them, why have we not been told about it? There could be many reasons, some only known to those perpetrating the cover-up, but there's no doubt that somebody fears the impact such a discovery could have on the human world. I'm keen to know more about this; if any of Dr Ali's colleagues, to whom he sent his photographs, are reading this, could you please contact me? Your information will be held in the strictest of confidence.
Posted by Ben Emlyn-Jones at 12:25