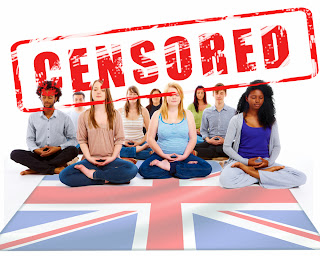 This online petition has just been launched and I implore all HPANWO-readers to sign it, even though its basis is so far unconfirmed:
http://www.change.org/en-GB/petitions/uk-prime-minister-david-cameron-stop-the-unnecessary-censorship-of-esoteric-websites-and-web-forums?share_id=GiAQWGMHse&utm_campaign=friend_inviter_chat&utm_medium=facebook&utm_source=share_petition&utm_term=permissions_dialog_false . It will send out a powerful message to anybody even thinking about introducing web censorship, that we the people will not stand for it. I'm pleased to see that it's almost full already. Here is the source page that prompted Change.org to set up the petition: https://www.openrightsgroup.org/blog/2013/sleepwalking-into-censorship.

The Internet is the most significant advancement in free public access media since the printing press. Interestingly when the first printing presses were invented about a thousand years ago in they were strictly licensed and it became a serious criminal offence to own an illicit one. Now it seems the same is being tried out in the modern world. I have my doubts about whether complete global Internet control is possible; the Net is so very decentralized and ubiquitous, but it is certainly possible to control a portion of it, at least temporarily. The UK Government has proposed Net censorship quite a lot recently, "coincidentally" at the same time that some terrible stories have been published about the consequences of Internet abuse, see: http://hpanwo-voice.blogspot.co.uk/2013/08/internet-bullying-prs.html. This latest article about it from the Open Rights Group is said to be based on discussions with Internet service providers. A few years ago my own ISP, Talk Talk, made a noble stand against the Digital Economy Act, see: http://www.bbc.co.uk/news/technology-15212651; I hope they will do so again with these new measures. The questionnaire the Open Rights Group published is two stage; the first asks whether you wish to have parental control, which is perfectly reasonable and is already done by most ISP's anyway. The second segment is what bothers me; what do they mean by "esoteric material"? I think the most likely interpretation is websites covering paranormal, spiritual and conspiratorial subjects. This includes HPANWO; and it also covers about 90% of all the other websites I visit. You might think that this is not a problem because all you have to do is deselect the options, but notice how select-all is the default setting? And please bear in mind that this is not the end result of the Government's censorship project, this is just the beginning. They will add more restrictions on once people get used to these ones. If we don't resist them we may end up with a World Wide Web which is a pale husk of its former self, resembling 's Kwanyong intranet, see: http://hpanwo-radio.blogspot.co.uk/2013/04/cmr-listener-in-north-korea.html.
Posted by Ben Emlyn-Jones at 14:00