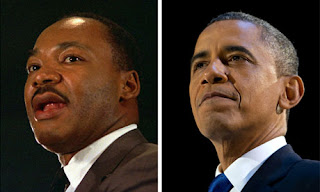 It is fifty years ago to the day that Dr Martin Luther King Jr made a passionate and poetic speech whose refrain was: "I have a dream!" In those days many parts of the had similar racial classification and segregation laws to Apartheid South , with black people officially designated as the social inferiors of white people in hundreds of different ways. There were many black racist individuals and groups at that time calling for all out war and even genocide against the white population in response (this is why I was so offended when the Nation of Islam leader Louis Farrakhan was made a guest of honour at the recent Citizen Hearing, see: http://hpanwo-radio.blogspot.co.uk/2013/06/programme-47-podcast-citizen-hearing.html); but into this melting pot of rage emerged a man of peace, preaching non-violent resistance in a similar way to Mahatma Gandhi in India, a spiritual man as well as a politician. Unlike so many others, Martin Luther King understood that hatred begets only more hatred and it was important to avoid its temptation. In 1968 he was shot dead by an even more obvious Government conspiracy than John F Kennedy's assassination. Here is a video of his speech from fifty years ago today: http://www.youtube.com/watch?v=smEqnnklfYs.

To mark the occasion, the current President, Barack Obama, will make a speech himself on the same spot at a rally to commemorate the event: http://www.bbc.co.uk/news/world-us-canada-23861859. I am disgusted by this and consider it an insult to the memory of Martin Luther King. This is not the first time Obama has tried to falsely leech off the legacy of MLK, see: http://www.theguardian.com/world/2013/jan/20/obama-inauguration-martin-luther-king. Obama may be the same colour as King, but in all other ways he couldn't be more different. Far from being a man of peace, Obama sends drones into Pakistan to mow down innocent bystanders; far from fighting racism, Obama canoodles with those who want to wipe out all natural human races and replace them with genetically-modified transhumanist monsters, less than 500 million of them. He rather transparently sheds crocodile tears over school shootings. I get sick and tired of hearing about "'s first black president!" It gives the deluded impression that Obama is an anti-establishment figure just because he is a negro, one of the people who have been on the receiving end of so much abuse over the ages. But all empires and oppressive regimes have at times fooled their conquered subjects by withdrawing overt power and replacing it with an apparent "man of the people" in governance, but one who is completely their puppet. The Romans did this, as did the Spanish and British Empires. It's the oldest trick in the book! Are Americans really falling for it again? Alex Jones' superb film The Obama Deception goes into this in more detail: http://www.youtube.com/watch?v=eAaQNACwaLw. Obama is as much a tool of the Illuminati global elite as any other head of government; only he is far more dangerous than most because he has this veneer of credibility. His deceit is also far more ambitious than average because his personal background is so obscure. His birth certificate is highly questionable and many of his classmates at the university he supposedly attended don't remember him, see: http://www.youtube.com/watch?v=Xjz2mbUxD1s. Today he's going to try and spread the lies even further and deeper than ever before. I hope he gets shouted down and booed off stage!
Posted by Ben Emlyn-Jones at 13:05