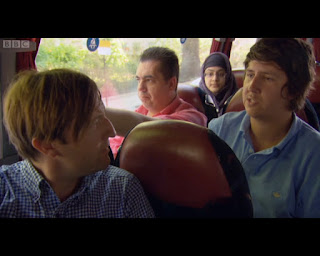 Well 7/7 Conspiracy Road Trip is upon us. See: http://www.bbc.co.uk/programmes/b01n6zt7 As regular HPANWO-readers know, I was asked to participate in this programme myself and refused, see: http://hpanwo-voice.blogspot.co.uk/2012/05/my-reply-to-renegade-pictures_06.html Did I make the right decision?
The programme is available on BBCi Player here, but only for a limited time after broadcast. By the time you read this article it may have been taken down: http://www.bbc.co.uk/iplayer/episode/b01n6zt7/Conspiracy_Road_Trip_7_7_Bombings/
However here’s a YouTube version: http://www.youtube.com/watch?v=a_3g9RgySwA

The show featured two people that I've had contact with; Tony Topping I’ve met several time and Sacha Christie, whom I’m familiar with only through the Internet. The format of the programme was virtually identical to the original Road Trip; see here for my review of 9/11 Conspiracy Road Trip: http://hpanwo-voice.blogspot.co.uk/2011/09/911-conspiracy-road-trip.html The only major difference is that the discussion of real evidence was even more minimal and distorted, and that they played the moral blackmail card even harder than this time. The “road trippers” had to face two grieving victims this time and there were many shots, including the end title ones, of memorials and flowers being left at the scene and close-ups cards with moving sentiments written in them. The message was loud and clear: “Shame on you! Shame! If you question the official story of 7/7 then you don’t care about the people who died and their loved ones’ feelings!” I’ve written several articles and made several films explaining how unfair and ridiculous this attitude is. See: http://hpanwo-tv.blogspot.co.uk/2011/10/how-to-show-respect-to-victims-of-911.html Shame on the BBC! Shame on them! Did I make the right decision? What can I say… Yes!

I wouldn't trust the BBC to be of any use in looking for the Truth! It owes it's existence to the Government, so it tows the agenda to discredit anything that exposes the Government Narrative as a lie!

Hi
I was a reseacher for that show and I'm afraid Ben that the decision was made not to include you way before you decided not to come on. The reasons was that we felt that you did not have enough knowledge for the subject.
Could I also point out that Renegade had full editorial on this series and the BBC only confimr the final edit for language. They do not have any input into who appears on the shows for Conspiracy Road Trip, and the stars that we feel can help make the show decide themselves whether to appear or not.
So the talk of 'BBC Propaganda' for this show is rubbish I'm afraid.
Thanks and kind regards