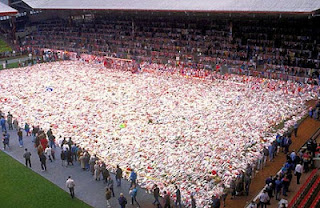 People who use the phrase “conspiracy theory” as a pejorative term for something meaningless and insane would do well to remember that conspiracies do exist and until they’re exposed anybody who suggests their existence is, by definition, a conspiracy theorist. The Ian Contra Scandal and Watergate were conspiracy theories at one point, as was the Dodgy Dossier and the Profumo Affair. Last year I discussed the Claudy Bomb Conspiracy, see: http://hpanwo.blogspot.co.uk/2011/09/nick-pope-his-next-step.html In the last week or two there has been disclosure over another conspiracy theory concerning the Hillsborough Disaster. This was a terrible incident, in which almost a hundred people were crushed to death at an FA Cup football match in April 1989. The full horror was seen by millions of people on live TV. This has been the subject of a long campaign to overturn the official verdict of “accidental death”. Just in the last few days it has been revealed that evidence was indeed covered up by the police and other authorities at the highest levels to falsely mitigate their role in the disaster, see: http://www.bbc.co.uk/news/uk-england-merseyside-19710415

As with all conspiracies the media often plays an underhand auxiliary role in keeping the truth at bay. This piece of meaningless and irrelevant trivia may have been attempt to knock the Hillsborough story off the headlines: http://www.bbc.co.uk/news/uk-19620164 Richard D Hall theorizes that the Phone-Hacking Scandal of last year may have been staged to do the same to the inquiry over the July the 7th 2005 London Bombings, see: http://www.youtube.com/watch?v=4cRCn1tjbn8 This is more theorizing that might eventually turn into factualizing.
Posted by Ben Emlyn-Jones at 19:39