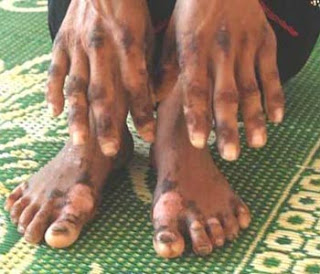 A mysterious disease is sweeping through Vietnam, see: http://www.bbc.co.uk/news/world-asia-17799053. It begins with rashes on the hands and feet and quickly progresses to failure of the vital organs and death. Nobody knows what’s causing this illness, but it’s already claimed over 170 lives. I wonder if this malady is linked to the terrible environmental damage done to that country during the long, bitter war of the 1960’s and 70’s. The Americans sprayed tons of toxic chemicals, made by Monsanto and Dow, all over the forests to kill the trees and to, supposedly, deny the enemy their hiding place. The results of this sound like a horror film. Almost half a million people were killed on the spot and afterwards mothers went on to produce deformed and stillborn babies. The Americans sent over during the war suffered in the same way.
Posted by Ben Emlyn-Jones at 10:09

In the CME conference I know, the internal medicine practitioners have discussed this dilemma. It's alarming to see and hear news like this, especially if this has already caused hundreds of deaths. I hope this can be resolved immediately.