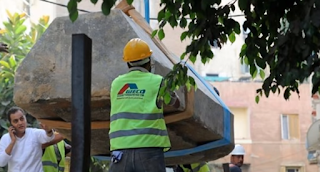 See here for essential background: https://hpanwo-voice.blogspot.com/2018/07/sarcophagus-update.html.
Following the opening of the mysterious sarcophagus in last week and the revelation of what lay inside, I assumed that all the remaining research would centre purely on identifying the three bodies found in it. However, somebody has informed me there is another twist in the tale; and it comes from a very interesting vlogger who has raised some pertinent questions. The reason that commentators, including me, thought that the sarcophagus had been contaminated by sewage was because of the malodorous fluid that filled the artefact. The stench it gave off was so bad that the excavation was suspended until the archaeologists could obtain the right personal protective equipment. However nobody detected any bad smells at all until the lid was lifted. If the antiquity had been contaminated by a dodgy drain then why was there no sewage outside the sarcophagus, soaking the soil around it and giving off an odour as soon as the digging had started? This means that perhaps the liquid was not sewage at all and was something put inside the casket before it was sealed. What followed sounds very amateurish and reckless. The fluid was pumped out so the skeletons could be removed and a small sample was taken for analysis. After that the remaining fluid was disposed of by pouring it out into the street like carwash suds. The excavators literally decanted the foul slurry into plastic bottles and just dumped it in the gutter. In the news report you can hear a loud argument break out as local residents confront the team and protest their actions. Who can blame them? Their children probably play in that street. Nothing is known about the liquid except that it has a terrible smell, which is a warning sign of toxin. If a mysterious disease suddenly emerges in then it may not be caused by a pharaoh's curse, but instead by a bunch of irresponsible fools who contaminated the neighbourhood around the dig with God-knows-what poison or pathogen. There are plans to remove the main body of the sarcophagus, once a stronger crane is brought it. So far there are no inscriptions anywhere visible on the stone box and nothing inside to identify the three interred individuals. If the bodies had any clothing or other belongings buried with them then these have not survived the passage of time. Source: https://www.youtube.com/watch?v=nMKTYmdVbOo.
Posted by Ben Emlyn-Jones at 19:01