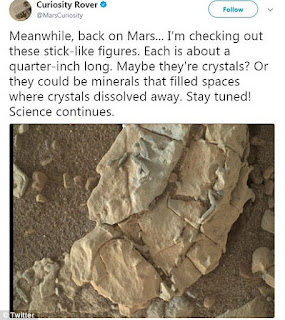 NASA has reported that the Curiosity probe has discovered some geological features on the planet Mars that are described as "stick-like". As is so often the case these days, they first released the findings onto Twitter. The reason these are interesting is that they closely resemble ancient fossils on earth. A palaeontologist called Dr Barry DiGiorgio from the says that this new data from Mars closely resembles the trace fossils he has seen from the Ordovician period; this dates from 485 millions years ago to 443 millions years ago. Trace fossils are fossils not of an organism itself but of what it leaves behind, like footprints or cavities left when its body decomposes etc. There is a resemblance I must admit, see: http://www.thefossilforum.com/index.php?/gallery/image/35152-ordovician-fossils-side-by-side-at-center-hill-lake/. NASA says these could be crystals or minerals deposited when crystals dissolve. Source: http://metro.co.uk/2018/01/08/nasa-spots-stick-like-figures-mars-resemble-alien-fossils-7213239/. I loathe the sensationalist and derogatory language in this article; "alien hunters" etc. This is interesting because it's not the first time phenomena resembling fossils has been found on Mars, see: http://www.richplanet.net/starship_main.php?ref=150&part=1, (if indeed they are on Mars, see: https://www.youtube.com/watch?v=mIXthbfSJcQ). If you look at the background links below you'll see additional evidence that NASA and other academic institutions are denying and suppressing evidence of life on Mars, even if it is only life that existed in the distant past. Why? For whatever reason, it is very important to the elite that we believe we live on a solitary living planet in a dead universe; an oasis of life in an infinite cosmic desert. This image is false and the fact that it is false is being reinforced with every new discovery.
See here for background: https://hpanwo-voice.blogspot.co.uk/2014/02/nasa-sued-over-mars-anomaly.html.
And: https://hpanwo-voice.blogspot.co.uk/2015/08/mars-monster.html.
And: https://hpanwo-voice.blogspot.co.uk/2017/12/cannonball-on-mars.html.
And: https://hpanwo-voice.blogspot.co.uk/2012/12/mars-curiosity-historic-announcement.html.
Posted by Ben Emlyn-Jones at 18:41

There is a lot of this sort of stuff in my new "Secrets in the Solar System" book which I will be publishing in the next couple of weeks or so!