Trump and the JFK Files 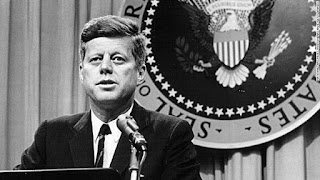 On the 26th of October 1992 in the United States of America a law was passed known as the "JFK Assassination Records Collection Act" that mandated the release of over three thousand US government files related to the assassination of President John F Kennedy (See the background links below for a complete and comprehensive analysis of the Kennedy assassination). This mandate was to be delivered within twenty-five years; that period expires today. President Trump has been a multifaceted and divisive individual within the conspirasphere, for example see: https://hpanwo-tv.blogspot.co.uk/2017/04/counter-trumpening.html, yet he Tweeted the unequivocal message today: 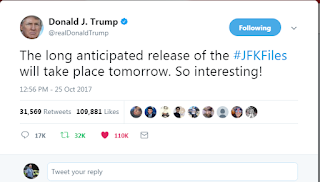 This is a very decisive statement. As US President, he alone could block the release by executive order and he is not going to do it. So what will we find in these newly-released files? The media is bubbling with speculation, for example see: http://www.independent.co.uk/news/world/americas/us-politics/jfk-files-trump-john-f-kennedy-assassination-release-tomorrow-so-interesting-twitter-a8020201.html. Firstly, it will take a long time to read them all. There are tens of thousands of pages within the files. A lot of it will be simply administrative and legal small print. So it will be some time before we have any complete commentary. However, we must be realistic here. Are we really going to see the publication of documents that contradict the findings of the Warren Commission? In my view, there is absolutely no question that Oswald was not the only shooter; in fact I doubt whether he took part in the murder at all. For the government to admit that would mean that they are also admitting that they lied about the killing of their own head of state. If they lied about it then it must mean they are complicit to a greater or lesser degree; I suspect the greater. Any hypothetical paperwork connected to such an operation would be completely exempt from the 1992 act and there is no way it would ever be willingly released to the public. I doubt if Trump knows anything about the full story; and if he asks too many questions about it he will very quickly end up the same way as his predecessor did on that November day in .
See here for background: http://hpanwo.blogspot.co.uk/2013/11/the-kennedy-assassination-50-years-on.html.
And: http://hpanwo-radio.blogspot.co.uk/2013/11/programme-68-podcast-jfk-special.html.
And: http://hpanwo-radio.blogspot.co.uk/2016/02/programme-176-podcast-mark-r-goode.html.
And: http://hpanwo-voice.blogspot.co.uk/2014/03/bobby-kennedy-two-gunmen.html.
And: http://hpanwo-voice.blogspot.co.uk/2014/05/marilyn-monroe-was-murdered.html.
Posted by Ben Emlyn-Jones at 16:34