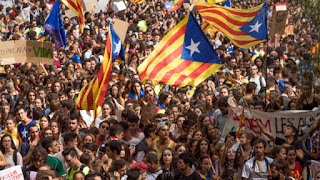 The Catalan nationalist movement has won its biggest ever victory. It carried out a referendum on independence despite a Spanish court ruling that it was illegal. The modern map of the shows only two nation states, and , but it actually consists of four historic kingdoms; , (), (the Basque country) and (called in the Middle Ages). was made famous internationally by George Orwell's book Homage to Catalonia, see: http://hpanwo-voice.blogspot.co.uk/2014/09/was-orwell-mediocre.html. has its own culture and language. Most Catalans will fiercely deny that they are Spanish. is officially a region of with a limited devolved government, however there is a very powerful independence movement there. The Catalan language has a similar status to Welsh in . Those who speak it are bilingual with Spanish, but it is a vital part of their identity. The regional government decided to go ahead with the referendum in violation of the ruling from . Farmers drove their tractors into 's biggest city. Luckily there is a local journalist there of British origins called Simon Harris who has provided on the ground live coverage in English, see: https://www.youtube.com/watch?v=4OM35k8ONI8. Polling stations have been occupied by protesters. There have been some ugly scenes where voting has been disrupted by riot police and many people have been injured, see: http://www.bbc.co.uk/news/world-europe-41463719.

The Spanish prime minister Mariano Rajoy said "Catalans have been fooled into taking part in an illegal vote. It is a mockery of democracy." However the passionate groundswell continues. If it carries on this could lead to terrorism or a new civil war. I hope the Catalans do get their independence. I am a former Welsh nationalist and there is a part of that still in me that will never die, so I sympathize with their plight. The question has to be though, what is their model for independence, should they achieve it? Will jump out of the Spanish frying pan into the European Union fire and just become another "member state" of that evil continental empire? This is the idiotic route that Welsh nationalism has now taken, see: http://hpanwo-voice.blogspot.co.uk/2014/05/plaid-cymru-and-eu.html. must understand that if it wants freedom it must win independence from and refuse to join the EU.
See here for more information: http://hpanwo-voice.blogspot.co.uk/2014/04/freedom-for-venice.html.
And: http://hpanwo-tv.blogspot.co.uk/2016/06/brexit-reality.html.
And: http://hpanwo-radio.blogspot.co.uk/2016/06/programme-193-podcast-eu-referendum.html.
Posted by Ben Emlyn-Jones at 00:04

hey ben you gonna blog about the vegas shooting mate. I reckon its a clear false flag to be honest pal. The cia have done it or the higher powers that be mate. Love to here your thorts mate. Take care mate. Baz

Hi Baz. Not got all the facts yet. not sure what to say

Nice one mate. Look forword to it. I read before that they reckon there was multiple shooters. Cud it be to make the yanks frightened and give your trump fella more powers? Cheers mate. Baz