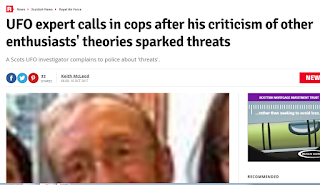 See here for essential background: http://hpanwo-voice.blogspot.co.uk/2017/10/the-larry-warren-controversy-part-23.html.
One of the most ridiculous newspaper stories I've ever seen was published yesterday in the Daily Record, a Scottish tabloid that has a reputation for making The Sun look intellectual. The story was about how James Welsh had called the police because of alleged death threats sent to him from Larry Warren. Larry is supposed to have enrolled the help of Scottish motorcycle enthusiasts to hunt Welsh down. The published photograph of Welsh is of very poor quality which is strange because he posts plenty of others of himself on social media; is this the best one they could use? Source: http://www.dailyrecord.co.uk/news/scottish-news/ufo-expert-calls-cops-after-11347858.
Once again I am lumbered with the task of providing a reality check. Everything I'm about to say is me repeating myself; there's no need even to post links this time for most of it. Firstly, Larry did not send anybody any death threats because if he did he would be in jail right now. The police take threats like this very seriously. However Larry has never been prosecuted for any such offence. He hasn't even been arrested and questioned over the matter. Secondly, the quote from Peter Robbins is merely Peter's opinion, one which I totally disagree with. Thirdly, Larry was available to comment; it's just that paper didn't try very hard to contact him, probably deliberately. Fourthly, James Welsh himself has posted aggressive and threatening statements online, and unlike him, I have the evidence for it, see: http://hpanwo-voice.blogspot.co.uk/2017/03/the-larry-warren-controversy-part-8.html. I have made Keith McLeod, the journalist behind the article, aware of these rebuttals; we'll see if the paper publishes an update.
See here for the next part: https://hpanwo-voice.blogspot.co.uk/2017/10/the-larry-warren-controversy-part-25.html.
See here for more background: http://hpanwo-tv.blogspot.co.uk/2016/06/scottish-ufo-and-paranormal-conference.html.
And: http://hpanwo-radio.blogspot.co.uk/2017/05/programme-236-podcast-larry-warren.html.
And: http://hpanwo-voice.blogspot.co.uk/2016/09/truth-mobbed-again.html.
Posted by Ben Emlyn-Jones at 17:44