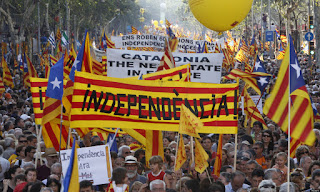 See here for essential background: http://hpanwo-voice.blogspot.co.uk/2017/10/catalonia-votes-for-independence.html.
The President of Catalonia Carles Puigdemont has made a long-anticipated public address following the independence referendum of October the 1st. It was a strange speech which was very equivocal, but he did say in as many words that the referendum does give the right to be an independent country. This is not the same as an immediate declaration of independence; in fact this is a deferral of that. He calls on the Spanish government to begin negotiations. This could be interpreted negatively by hardliners on both sides. Extreme nationalists might accuse him of selling out while unionists will claim he is bullying the government. Simon Harris, a local journalist with British roots, has appealed for calm, see: https://www.youtube.com/watch?v=KgvJOv-3yFQ. What Puigdemont is doing is a standard Catalan political tactic. He is committed to independence and will not back down, but he knows that if he is too hasty he will merely escalate the situation and we'll have a repeat of the scenes on polling day where the Guardia Civil beats people and drags them off. Puigdemont is trying to avoid civil war, a war he knows he cannot win. He does not wish to provoke to the point where they invoke "Article 155" and suspend the Catalan parliament; the very fact can do that proves that devolved government is as much a confidence trick in as it is in and . He has called on the United Nations and other countries to recognize as a sovereign state. Unfortunately he has also asked the European Union to "intervene"; this is not wise. Never encourage the EU to support you in anything; they only do that when they want to take you over.
See here for more information: http://hpanwo-voice.blogspot.co.uk/2014/04/freedom-for-venice.html.
And: http://hpanwo-tv.blogspot.co.uk/2016/06/brexit-reality.html.
And: http://hpanwo-radio.blogspot.co.uk/2016/06/programme-193-podcast-eu-referendum.html.
Posted by Ben Emlyn-Jones at 19:38

Thank you for providing this important information. Just finished a night shift and NOW I can sleep!

Grate artacle that mate. Indapedence is always the answer I would say. I support your snp though can't stand that sturgen woman. I mean if you support uk Indapedence from europe then you should support all moves for soverenty otherwise people who dont are like hipocrits. Sorry for bad speling mate but am drunk to be fare mate. I love you anyway pal, your a top geezer. Your simply the best as the song says. Cheers Ben my mate. Baz