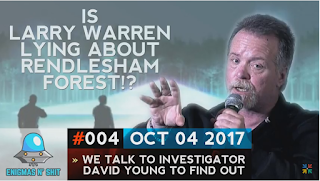 In other news, Sacha Christie has announced she is leaving UFOlogy, see: http://sacha-christie-infomaniachousewife.blogspot.co.uk/2017/09/th-th-thats-all-f-f-folks.html. This article tells the sorrowful tale of a community too foolish and immoral to accept her divine governance. She will enjoy watching its ultimate failure in the knowledge that, at the last moment, we will all know that one hundred percent of the blame lies with all those who ever defied Sacha Christie... Personally I'm pretty sure she'll be back. Give her three months or so. This is not the first goodbye letter she has written and it won't be the last.
See here for the next part: https://hpanwo-voice.blogspot.co.uk/2017/10/the-larry-warren-controversy-part-24.html.
See here for more background: http://hpanwo-tv.blogspot.co.uk/2016/06/scottish-ufo-and-paranormal-conference.html.
And: http://hpanwo-radio.blogspot.co.uk/2017/05/programme-236-podcast-larry-warren.html.
And: http://hpanwo-voice.blogspot.co.uk/2016/09/truth-mobbed-again.html.
Posted by Ben Emlyn-Jones at 18:47