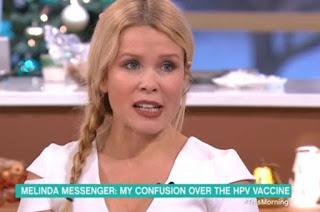 Melinda Messenger is a former air stewardess who became famous for being a glamour model and Page 3 girl. She has three teenage children and has suffered many maternal medical problems as a result such as pre-eclampsia and post-natal depression that drove her close to suicide. I've not heard much about her since her days of fame which peaked in the late 90's, but it's clear she is very awake and open-minded. Her children all go to a Steiner-Waldorf school of the kind the skeptics want to ban, see: http://hpanwo-voice.blogspot.co.uk/2012/11/skeptocrats-attack-steiner-schools.html. No doubt her nonconformist ideas have led her into refusing to give the HPV vaccine to her daughter Evie. This is a wise move in my opinion and I made sure my own daughter did not have it. The human papiloma virus is a sexually transmitted infection that can lead to cervical cancer. However protection is easy and nothing additional to a condom in necessary. Also the infection can be detected long before it forms into cancer by the existing "smear test" screening programme. This simple and painless procedure involves gathering a small specimen of cells from the cervix using a wooden spatula. As always though, simple and harmless solutions are never enough when there is a product to market and a population to mass-medicate.

The HPV vaccine schedule is a multi-billion dollar industry. It consists of not one injection, but three. The vaccine is given to girls in their early teens, an age well below when it is socially acceptable for them to become sexually active in most of the world's cultures. Many people report serious side effects. Some women even develop chronic fatigue syndrome, allergies and irregular menstrual periods after being given the HPV vaccine. The media has always been an important tool when it comes to spreading propaganda about medicine and it recruits "celebrity docs" like Dr Ben Goldacre to appear on television and promote the official line. See background links below and also Dr Len Horowitz' film In Lies we Trust- Hollywood, the CIA and Bioterrorism: https://www.youtube.com/watch?v=IktAYg9YCPA. A recent debate on ITV's This Morning is an example. The regular medical hosts Dr Zoe Williams and Dr Chris Steele were brought in to comment on an interview with Melinda Messenger in which she explains her concerns about the HPV vaccine and her decision to withhold it from her child. "Dr Chris" attacks Melinda for speaking publicly, fearing that she'll set an example to others. "Dr Zoe" is more sympathetic and says: "I know it must be hard being a parent..." She's clearly the good cop. The presenter Philip Schofield does not question the establishment line the two doctors recite, but does challenge Melinda during her opening speech. He also tells the viewer proudly that his own two daughters have both had the HPV. He then reads out a statement from Public Health in which they express their displeasure that the programme is even being broadcast. This looks to me like a set-up. However Melinda held her ground firmly and calmly and says at the end: "Do more research!" Well done, Melinda. I hope the viewers will.
See here for background: http://hpanwo-voice.blogspot.co.uk/2015/04/vaccinate-or-else.html.
And: http://hpanwo-voice.blogspot.co.uk/2014/02/us-and-uk-governments-vaccine-lies.html.
And: http://hpanwo-voice.blogspot.co.uk/2014/01/benefit-cuts-for-mmr-dodgers.html.
And: http://hpanwo-tv.blogspot.co.uk/2015/01/real-zombies-2015.html.
Posted by Ben Emlyn-Jones at 15:38