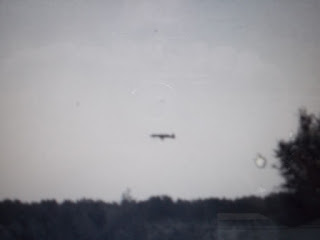 See here for essential background: http://hpanwo-voice.blogspot.co.uk/2017/01/is-larry-warren-fraud-part-2.html.
The saga of Larry Warren and his accusers is moving faster than I expected. We already have enough material for a new episode to peruse, and Part 3 began before Part 2 was even over. As soon as I posted Part 2 I was contacted by my good friend Andrew Burlington, known online as "Victor Nevada". He had noticed something about the photograph Sacha Christie posted on her last blog article; the one she says was on Larry's laptop, see: http://sacha-christie-infomaniachousewife.blogspot.co.uk/2017/01/larry-warrens-a10-ufo-photograph-is.html. As I said in my previous article, Sacha explains this as coffee cup rings and I reply with my own assessment of that possibility. Andrew has a lot of experience in image analysis, in fact he has on ongoing project to examine the "Alien Interview" video, see here for details: http://hpanwo-radio.blogspot.co.uk/2016/07/programme-196-podcast-alien-interview-20.html and: http://hpanwo.blogspot.co.uk/2015/01/area-51-alien-interview-new-research.html. I really should have approached him before I published Part 2! He says that the image is actually a screenover; it's made by somebody photographing a monitor display with a camera. The white marks are caused by ambient reflection coming off the monitor screen. He says that the reflection is actually that of the photographer. Once he'd pointed this out to me it clicked. In fact, as is often the case when your brain picks out a recognizable pattern, I can no longer perceive it as random. Compare the image above to the copy below with my annotations. You can clearly see a human face, a person wearing oval-shaped spectacles holding a camera close to the screen. Their hands are clenched as they hold the camera and the curve of their knuckles is plainly visible. You can even see the mouse cursor in the bottom right. The circular mark I noticed is the camera lens. Why would Sacha use an image of the photograph created in such a deficient way? If she has a file of the photo on Larry's laptop then simply copy and post it. If it doesn't have a compatible interface then a technician at a computer shop will do it for her in three minutes flat. There's no need to take a photo of the open file on the screen and then make a new file, full of reflections and of much poorer quality, and post that instead; making up excuses about "coffee cup rings". Why? It is especially bizarre because, as I say in Part 2, Sacha already has used another far better quality copy of the alleged "real original" that she obtained from Barry Greenwood. In fact the quality is so poor on her reproduction of the "second fake" on Larry's laptop, that it could instead be the one with the UFO's; the one Larry claims is the real original. The UFO's could merely be hidden by the low resolution. 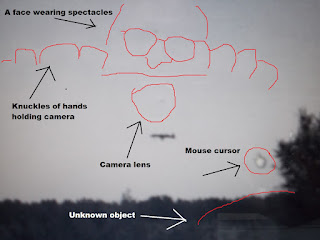 Looking at the latest info and the development in the last few hours over the Picture, Larry is looking more and more the Fraud sadly..:(

Based on what I've seen so far and reported in this series of articles, I'm not so sure. I also question the conviction of his detractors. People sure of their position tend to exhibit better conduct. More on that later.

I really don't know how to take this situation,it seems that british ufological research is pulling itself apart..

It's been an ongoing process that has lasted close to a year now, Mark. Both sides blame the other.

But there are idiots out there determined to try and ridicule people....
And we know when they are Ben!

Thanks - Darren Perks (the real one)

That's true, Darren. We've both run into them before.

Anon, the A10 pic is fake, I know. But Larry Warren is not a fraud. The photo does not even belong to Larry. There are several prionts, once of which was found in his photo album by somebody else. Nobody knows for sure where it came from.