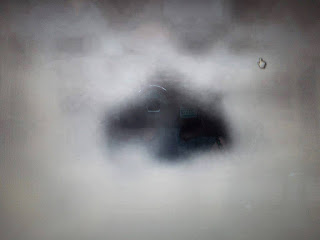 See here for essential background: http://hpanwo-voice.blogspot.co.uk/2017/01/is-larry-warren-fraud-part-3.html.
Sacha Christie is currently making a big song and dance about a conversation on my Facebook feed that was intended to be humourous. (Incidentally, I wonder who on my friends list is Sacha's sock-puppet. She always seems to know what I'm doing on Facebook even though I've blocked all her overt accounts.) The joke is that the face Andrew Burlington and I spotted is actually Nick Pope. Although there is something vaguely Papal about that reflected visage, it is far too indistinct to make a formal identification and I do not really accuse Nick Pope in any way of being the photographer. This was just a joke and I joined in with it for fun. Goodness knows, the Larry Warren controversy is such a grim subject that if I didn't have a laugh about it occasionally I'd end up crying. Sacha has taken this very obvious banter and twisted it into a serious suggestion (She does this kind of thing a lot and I'll be saying more about that later).

Sacha also reckons that Larry is the face behind the camera and gives other supposed examples of Larry making screenovers of his A10 photo, and others where he met famous people, although she does not give a reason for why this automatically makes them fraudulent. The A10 photo, in this case, is the close-up of the bottom UFO, see above. In this case the reflection is far less distinct than in the last photo I addressed. Despite this, Sacha claims to be able to identify the person taking the photo; she says it is Larry Warren. I don't know why she thinks that when she also claims that we could not nominate Nick Pope from the previous photo, even in jest. Larry's distinguishing features, apparently, are a chain on his wrist and the top of his head... No, I can't recognize Larry from that either. She mirrors the photograph, see below, and says you can see more easily that way; I don't know why. For some reason the forehead is clearer in the mirrored photo, but it still could be anyone as far as I can judge. What's more this image appears to have been tampered with. There is a large black blotch in the centre, just below the left side of the camera. This looks like airbrushing to me. I don't know why this has been done. There are no clear answers yet; only more questions. I will return to this subject later. Source: http://sacha-christie-infomaniachousewife.blogspot.co.uk/2017/01/barry-greenwood-issues-statement.html and: http://sacha-christie-infomaniachousewife.blogspot.co.uk/2017/01/sacha-christie-and-nick-pope-faked.html.
Many thanks to a friend for the image analysis; somebody who wishes to remain anonymous. 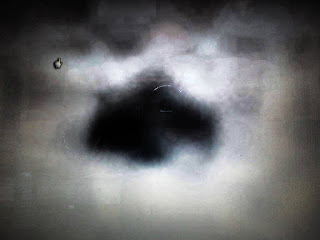