Sherlock- The Hounds of Baskerville 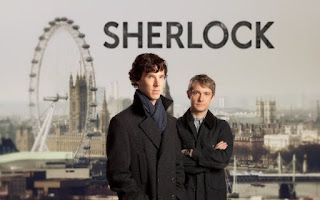 Sherlock Holmes is one of the most vivid and iconic fictional characters in literary history. The eccentric detective appeared in four novels and numerous short stories penned by the paranormal researcher Sir Arthur Conan Doyle between 1887 and 1927. At one point Doyle killed off Holmes and then used a plot device in which Holmes retrospectively faked his own death to bring him back to life. This was because his readers put so much pressure on him. The most famous Sherlock Holmes story is The Hound of the Baskervilles which was published in 1901. It is a murder mystery involving a legend of a supernatural man-eating dog that is reputed to haunt in . The story has been adapted into numerous films and television programmes. Many are not set in the Victorian and Edwardian periods which the books emerged in, but are instead contemporary to the time when the adaptations are made; including what I consider the best which was released in 1939 and starred Basil Rathbone as the eponymous character. The latest adaptation of the story is also contemporary. Sherlock is a series made by the BBC and, despite being set in modern , is carefully faithful to Doyle's template.

The Hounds of Baskerville is the second episode of the second season of Sherlock and is loosely based on The Hound of the Baskervilles. What's fascinating about it is that it includes conspiratorial factors in the plot. As in the book, a young man from approaches Holmes and asks him to investigate a death on , possibly caused by a supernatural dog. When he was a child he witnessed his father being killed and eaten by a huge canine monster, much bigger than any other dog he'd ever seen. Since then he had suffered a mental breakdown and was undergoing therapy with a Dr Stapleton; the name of the villain in the novel, in the TV series she is a female psychiatrist and only plays a secondary role. The young man suspects that his father's death might be linked to a nearby secret government laboratory, similar to Porton Down, called Baskerville. Local people have heard rumours that the government is breeding huge genetically modified dogs covertly to be used in warfare. Holmes is famous for being extremely deductive and observant. He can work out a person's entire life story almost at the moment he meets them by cold-reading the tiniest detail. His brother Mycroft Holmes is also a top official, and so by impersonating him Holmes manages to blag his way inside Baskerville. Mycroft is both helper and obstacle because has also sent Inspector Lestrade to to keep an eye on his errant brother. Holmes and Dr Watson soon discover the truth of what is going on. There are no real giant dogs in Baskerville, but there is an experiment to develop gas that induces confusion and terrifying hallucinations. The idea is to use this as a weapon of war to disorientate and demoralize enemy soldiers on a battlefield. This is being tested on and the young man's father was murdered by one of the scientists there because he was a test subject in the experimental programme and threatened to go public. The fictional project is codenamed H.O.U.N.D., the initials of the scientists who developed it; and it has real life counterparts, such as MK Ultra. Obviously Holmes and Watson eventually unmask the antagonist and solve the case. It's interesting that the BBC would bring this element into their latest adaptation; it would not be very difficult to recreate The Hound of the Baskervilles in its original storyline for the Sherlock series. The Hounds of Baskerville can be purchased here: https://www.amazon.co.uk/Sherlock-2-DVD-Benedict-Cumberbatch/dp/B005UL537Y.
See here for more details: http://hpanwo-radio.blogspot.co.uk/2016/08/programme-199-podcast-neil-sanders.html.
And: http://hpanwo.blogspot.co.uk/2009/11/alternative-view-3-part-2.html.
And: http://hpanwo.blogspot.co.uk/2007/10/blakes-7.html.
Posted by Ben Emlyn-Jones at 18:28