Another Good Mural in Oxford 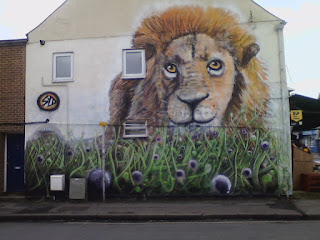 A new mural has appeared on the side of a corner shop in . It can be found on a wall overlooking the junction of and . I don't know who made it, but it might be possible to find out. and its environs has a great tradition in folk art, see background links below, and there will be official planning permission on record. The graffito depicts a lion sitting in a field of plants with circular blue blooms. In the background to the left on the peak of a hill is a dome-shaped building or rotunda. There are three brightly-lit windows on the facade. Above that is a yellow circle with a black outline; and there are lines underneath that are either movement trails or black liquid drips. Inside the circle are the letters SYD; this could be the artist's signature. Is the lion a depiction of Aslan? Aslan is a great lion who is the central character of The Chronicles of Narnia, a series of books by the Oxford-based author CS Lewis. This seven-book series is aimed at older children and young adults, but can be enjoyed by more mature readers as well. It contains some deeply intellectual and esoteric themes. The background structure reminds me of a scene in the prequel, The Magician's Nephew where the protagonists encounter an enchanted orchard on top of a hill surrounded by a high circular wall. As I say in the background links below, I love non-conformist public art. It brightens up the street and gets people thinking. I hope this particular masterpiece is left alone and not whitewashed like all the others I have endeavoured to preserve.
See here for background: http://hpanwo-voice.blogspot.co.uk/2010/06/rip-subway.html.
And: http://hpanwo-tv.blogspot.co.uk/2013/03/non-conformist-folk-art.html.
And: http://hpanwo-voice.blogspot.co.uk/2012/04/good-mural-in-oxford.html.
And: http://hpanwo-voice.blogspot.co.uk/2013/02/good-mural-is-gone.html.
And: http://hpanwo-tv.blogspot.co.uk/2014/03/illuminati-graffiti-in-oxford.html. 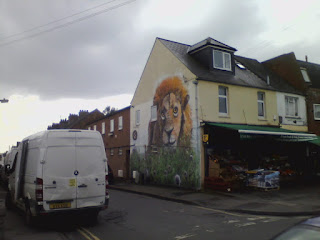