Osborne vs the Lords 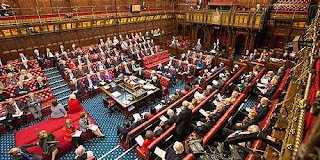 George Osborne has earned the dubious honour of being featured on HPANWO Voice two days in a row. This time it's due to his latest diabolical scheme to cut working tax credits. These are a government benefit currently claimed by over three million people in employment and are delivered in accordance with a person's income and how many children they have. I myself claimed working tax credits for seven years. Our noble chancellor has targeted them for cuts as part of his Austerity™ package so that the state can pay back the non-existent money it owes the banking system. The average tax credit family with one or more adult in employment will be £1,300 worse a year. These include some of the poorest workers in the country. As Jeremy Corbyn has said: "You'd honestly think that it was excessive benefit claimants and disability living allowance that caused the crash of 2008!" The tax credit cuts have always been an understandably unpopular and controversial proposal, but now they've caused an unprecedented ruckus, not because of mass protests in but because they've been rejected by the House of Lords.

Many countries' government consists of a bicameral legislature. This is where there is more than one parliamentary assembly. Usually these countries are federations like , , and the ; but sometimes unitary states have them too, like and the . The "upper house" in the is the House of Lords and its role is to debate, amend and, in some cases, block bills passed by the House of Commons. Unlike the upper houses of most other bicameral states, the House of Lords can introduce its own legislation. However its powers are limited and the Commons can submit bills for royal assent without the Lords' approval and can also overrule the Lords on some issues, particularly monetary policy. This is what might happen now because the House of Lords has voted to delay the passing of Osborne's tax credit cuts bill. This is a major victory for justice and common sense in the face of runaway Austerity™ which has been ruining the lives of the most vulnerable people in society for years, see background links below for details. He says he's going to press on with his plans regardless, but with the scandal he's caused now I can't see that as realistic. Source: http://www.bbc.co.uk/news/uk-34645715. What I find most contemptuous about Osborne's reaction is that he has mixed his disapproval at the probable loss of his bill with a declaration of his support for the sentiments of the House of Lords reform campaign. To my knowledge he has never spoken out about this issue before. There is a movement in this country that for more than a century has pushed to transform the House of Lords. Today the Lords consist mostly of bishops appointed by the Church of England and life peers who are primarily people appointed to the House of Lords by the monarch, usually after a number of decades of being a member of the House of Commons. The rest are the few hereditary peers. Some members are made peers for other reasons. One of them is Doreen Baroness Lawrence of Clarendon OBE who accepted her peerage after her teenage son Stephen was murdered and the police bungled the investigation amidst much publicity (I don't wish to judge her, but I do wonder why she agreed to be a peer under those circumstances). The reformers want to make the House more democratic by having elected peers in the same way we have elected Commons MP's. This is the case in most other bicameral legislatures, for example Americans vote for their senators. I'm not sure what I think of that; in fact I've completely lost faith in democracy and did so a long time ago. It seems to consist of gutless, heartless, brainless lying cheats like George Osborne being continuously relayed into power by a raging mob of Jeremy Kyle victims... Sorry, there's no way to say that without sounding arrogant, but I think it's a fact. Perhaps a benevolent aristocracy of some kind with a bit of good old-fashioned noblesse oblige would be an improved form of government compared to what we have now; but I'll have to explore than in more detail in a dedicated post. However, whatever your opinion on Lords reform, you must surely see through George Osborne's crocodile tears. He doesn't give a damn about an unelected upper house; he's just saying it now because said house hasn't played ball with him on his pet project. It's a total sham every bit as much as his Trident contract, see: http://hpanwo-voice.blogspot.co.uk/2015/10/new-trident-contracts.html.
See here for background: http://hpanwo-voice.blogspot.co.uk/2015/02/cameron-pushes-workfare.html.
And: http://hpanwo-voice.blogspot.co.uk/2014/12/austerity-did-you-really-think-it-would.html.
And: http://hpanwo-voice.blogspot.co.uk/2014/04/uniforms-for-unemployed.html.
And: http://hpanwo-tv.blogspot.co.uk/2011/04/get-job-you-lazy-scroungers.html.
Posted by Ben Emlyn-Jones at 18:41

If Osborne has a sense of entitlement, it may be owing to the title of heir apparent to the baronetage of Ballylemon in Waterford, Ireland. It would not surprise me if the current inhabitants of Ballylemon would have a sneaking regard for Osborne, who I understand has received a warm welcome there in the past. This regard of the rural Irish for high horse aristocratic arrogance is of course concomitant with a diametric disregard towards their fellow citizens, particularly urban based citizens.

That's a cynical view of the Irish, Laurence. However, all people can adapt. Hope next time Ozzy visits his Ballylemon seat the people welcome him with a few rotten tomatoes.

Blogger Ben Emlyn-Jones said...
That's a cynical view of the Irish, Laurence. However, all people can adapt. Hope next time Ozzy visits his Ballylemon seat the people welcome him with a few rotten tomatoes.

True Ben, it is cynical but it is a necessary evil to be cynical in modern, culturally Marxist Ireland. It would be equally gratifying were the parish to recycle some waste veg on the Baron but it is very unlikely given the gradual destruction of morale in the Republic by a handful of determined cultural Marxists in the MMS, government, judiciary, bar, and law and the inherent inclination of the Irish to tribal politics (note the Irish PM is called An Taoiseach, meaning Tribal Leader). A resultant "grá" for a seemingly harmless representative of the Crown does not seem so out of place in the current climate.

Or put another way, the Irish don't know whether they're coming or going these days.

P.S. Apologies for reprinting your reply, however it is getting confusing with all the spam.

Laurence, I'm deleting the spam as I go along. Apologies to all commenters for the inconvenience caused. If cynicism is necessary then so be it, for you know your own folk best. Do you think the Taoiseach is a representative of the Crown. Maybe, because many of his predecessors have been in the Bilderberg Group. Thanks to Peter Sutherland Ireland is not ready to join Russia in being an IMF rebel. But your people have fighting spirit. it just has to be reawakened.

Hello Ben. I have an interesting personal story on "Suds", as he is known colloquially in Ireland. I was flying back to Dublin from London on Wednesday 23rd May 2012. This was a week before the so-called EU Fiscal Compact Treaty (held on the 31 May 2012), essentially an EU wide austerity force majeure. While waiting in the public lounge at Terminal 1 (this was about 8:15 pm for the 21:10 pm flight), in walks Suds and wife and sits down at the next table. Very quiet with minimal platitudes. I was immediately suspicious of the timing - considering the importance, EU wide, in the middle of the 2011/2012 "financial crisis" and the so-called Irish constitutional veto. My suspicions were confirmed at the gate where dotted around were Hugo MacNeill (former rugger international and Suds's right hand man at Goldman Sachs), Austerity government MSM propagandist in chief, Dan O'Brien (look at this propagandist junk on "improving competitiveness", a euphemism if ever there was one) Irish Times propaganda, and a RTÉ representative (cannot remember which one). Preposterously, they were all studiously avoiding each other. I stood in front of O'Brien and looked at him until I caught his attention, then, with dignity, looked one-by-one to where Suds et al. were seated and looked back. O'Brien got the message - at least one person in the room knew what they were up to. Holding secret meetings in London and Dublin with the Irish government to ensure the austerity treaty was passed, which it was--in a turkeys voting for Christmas fashion--the next week.

That is interesting regarding the Bilderberg group. I do not know to which Taoisigh you are referring, however I suspect that Charles Haughey was a psychopath, based on his record of obtaining weapons and explosives from Gaddafi for the IRA to blow up innocent people in England and NI, personally selling passports to international terrorists for millions of pounds, and having henchmen beat up political opponents in the Dáil. I also suspect that he experimented with Manchurian candidates for political ends, as I believe he was behind the brain washing of Malcolm McArthur in order to remove the Attorney General: GUBU .

I wish I could agree with you on the fighting spirit but I fear the effects of extreme cultural Marxism will not easily dissipate for many generations, any more than it will in the UK.

That is an interesting story, Laurence. Thanks for sharing! That's very suspicious behaviour on the part of "Suds" (A brilliant nickname for him!) I think both Haughey and Ahearne were in the BG.