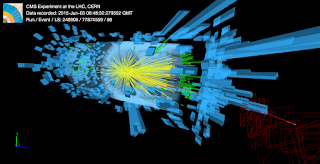 The Large Hadron Collider at CERN on the border of and has begun the operational experiments for "Run 2". It was restarted in March 2015 after a two-year maintenance and upgrade period and it will now be capable of generating collision energies more than twice as powerful as it ever did on its first run where it discovered the Higgs Boson in 2012. During March the protons, basic hydrogen nuclei, were gradually spun up first in the linear accelerators LINAC 1 and LINAC 2. Then they were passed on to the 150 foot diameter Proton Synchrotron Booster. Once at a 50 mega-electronvolt energy they were transferred to the next stage, the Proton Synchrotron, the first and oldest circular accelerator at CERN, built in 1959. Once they're up to 1.5 GeV they go to the Super Proton Synchrotron, the first accelerator built in a deep underground tunnel; in this case one with a 4.35 mile circumference. Then, when they're at 450 GeV they are finally injected into the Large Hadron Collider. On the 20th of May the scientists at CERN began proton collisions in the LHC at a record-breaking energy level of 13 tera-electronvolts. Spokesmen from CERN have issued a press release stating that collisions had happened and that the "data tap" is on, meaning that scientific experiments are underway. The LHC will continue to be powered up to full throttle, 14 TeV, by mid-July. Some, like Stan Deyo, claim that the LHC is capable of even higher energies and has already circulated non-colliding beams of 16 to 17 TeV, see: http://www.bbc.co.uk/news/science-environment-32976838. The strange picture you see above is actually a diagram of one the first 13 TeV collisions; it shows the subatomic debris scattering in all directions from the pulverized protons. This is an explosion of a kind never seen before on Earth, possibly never in the entire universe; what effect will it have? In the background links at the bottom I discuss in detail the kinds of hazards the LHC might pose, like creating mini-black holes and runaway strangelets; and opening up a wormhole into parallel universes. Numerous materials have appeared online by people thinking along similar lines to myself, albeit mostly from a Christian perspective. They tend to be Americans from the Bible Belt and see the LHC as the instrument of Satan intended to bring on the Apocalypse, for example see: https://www.youtube.com/watch?v=3dDlSYl3J6c and: https://www.youtube.com/watch?v=e62z5zJjp2I. Despite our different religious perspectives, these people make similar points to me about this. And it's not just men of the church who have "conCERNs"; more alarmingly, fringe tendencies within the scientific community are also dubious about the LHC's safety. The most prominent of these was Walter L Wagner, see background links, but they have been joined by others, and one of them is probably the most famous and respected physicist in the world, Stephen Hawking, see: http://www.inquisitr.com/1824353/cerns-move-to-restart-large-hadron-collider-at-double-power-reignites-doomsday-fears/.

Whatever harm the LHC is capable of doing it may well already have done it, in that case, and we have simply to wait to see its effects. CERN management have hit back by saying that their giant six billion dollar, five and half mile wide machine is completely safe; and their most prominent public defender is Prof. Brian Cox, see: http://hpanwo-voice.blogspot.co.uk/2013/09/prof-brian-cox-watch-this-space.html. That means in the belief system of these American Christians, Prof Brian Cox must be the AntiChrist. (Disclaimer: that's just a joke. The Coxxer is not the AntiChrist in my view, so please do not hurt him in any way.) I may not be religious, but I am no atheist. I've explained in the background links how I think there is an occult element to CERN and the LHC. The statue of the Hindu god Shiva standing in the grounds of the laboratory is very odd. Shiva is the most potent god in the Hindu pantheon and is the creator-destroyer of the universe. It also appears that for the first time there may even be physical evidence of the huge instrument's interdimensional properties in the form of the "unidentified lying object", see: http://hpanwo-voice.blogspot.co.uk/2015/05/mystery-object-found-inside-lhc.html. This doesn't seem to have obstructed current operations; but what might come out it next could. I've also heard rumours that the remains of a Roman temple were found at CERN; this might indicate that the laboratory is constructed on a powerful energy ley line site. The HPANWO reader might wonder why I'm still cheerful. If the Large Hadron Collider really is in the act of triggering Armageddon then what can we do to stop it? Well, I have a powerful intuitive feeling that things are going to be alright. As I say in the background, there are occult forces for good at work in this world, as well as evil. What's more some of the information in those videos might not be accurate; for instance the Roman temple was not a temple at all, but a villa, see: http://timeline.web.cern.ch/gallo-roman-ruins-discovered-at-cms-dig-site. It was just a house where somebody lived with an adjoining farm; there's no archaeological evidence to say that the area around CERN was known in the past to be charged with geoenergy in any way, and the discovery that the Romans lived there was only made during the LHC's later periods of construction. Also some sources claim that Stephen Hawking was misquoted about the LHC, see: http://www.popularmechanics.com/science/a11217/what-stephen-hawking-really-said-about-destroying-the-universe-17192502/. I've recently begun watching the videos of Anthony Patch, for example see: https://www.youtube.com/watch?v=XJkx-I4fw4o. Patch is an American Christian, but he is far more knowledgeable and level-headed than much of the rest of the conCERNed community. He is a physicist and so can talk the language that the experts use. He agrees that the LHC is very dangerous, but he comes across as very optimistic and appears to believe that this story will have a happy non-Rapture ending. Obviously we all share that hope I'm sure. Time will tell, watch the HPANWO Voice blog for further updates.
See here for background: http://hpanwo-voice.blogspot.co.uk/2015/03/lhc-restart.html.
And: http://hpanwo-tv.blogspot.co.uk/2015/05/stargate-brighton.html.
And: http://hpanwo-voice.blogspot.co.uk/2012/07/higgs-boson-and-lhc.html.
And: http://hpanwo-voice.blogspot.co.uk/2014/10/god-particle-doomsday.html.
Posted by Ben Emlyn-Jones at 18:11

I hope some 1000-headed trans-dimensional monster comes through to say in a Kenneth Williams voice:
" 'ere, stop messing abhaat" and proceed to devour 'ufos are bollocks Cox' and all the naysayers.
That'll teach 'em, :D
But - who's to say they're doing wrong? Who knows- they might be inadvertently 'letting the right ones in'...
mmm...?

LOL, Tino. That would be worth seeing! Naturally when it comes to the LHC it's a complete leap into the unknown, so yes. It could end up working in our favour