Keep the Flag Up 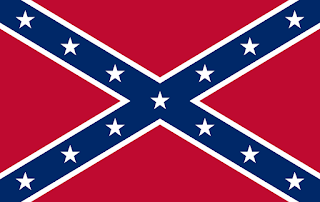 There is a bizarre tussle going on currently in the United States of America to stop officials flying the Confederate "battle" flag, see above, over government buildings in the Deep South. According to the protesters it is "racist", a symbol of black slavery. This is very strange because until recently it was a very common and innocuous symbol that could be seen all over the world. In fact outside the the Confederate flag was regarded almost as much a symbol of as the Stars and Stripes. When I was a child there was a pop music show called No Limits which had a section on the American charts and it illustrated the segment of the show with the Confederate flag. It often decorated the leather jackets of motorcycle enthusiasts and fans at rockabilly concerts, and it was stencilled on the roof of "General Lee", the doorless mode of transport favoured by the two brothers in the TV series The Dukes of Hazzard. I don't think I was wrong to assume that the flag was a popular generic symbol for everything connected to the , from iced tea to river boats. Some states have laws to protect it as a cultural icon. According to a 2011 U-Gov poll 58% of Americans felt no negative reaction to the Confederate flag at all and 9% actually liked it; statistically those figures must include people of non-Caucasian racial and cultural backgrounds. So why suddenly is it the new Swastika?

The Confederate flag today is an informal standard and has no national officialdom. The only time it did was when it was the military pennant of the self-styled Confederate States of , a union of secessionist "Rebel" states that existed from 1861 until 1865. The Confederacy covered an area whose primary industry was cotton grown in slave labour plantations. The Confederacy was crushed in the extremely bloody and destructive American Civil War which resulted in the deaths of almost a million soldiers and also many non-combatants. A scorched earth policy followed leaving many Southerners violated, homeless and impoverished. Women were regularly raped and houses were burnt to the ground. Southern lands and assets were stolen by "carpetbaggers". This is why the film Gone with the Wind is such a milestone because it tells the story of the war from the perspective of the losing side. I've since learned that the losers' story has been ignored in other wars as well, see: http://hpanwo-voice.blogspot.co.uk/2015/05/hellstorm-movie.html. We are told that the government wiped out the Confederacy because it "cared about the slaves!". Anybody who studies history and politics must realize that this claim is insulting nonsense. It was greatly to their discredit that the Southern states and the Confederacy allowed slavery. At the beginning of the 19th century slavery had been abolished by an international treaty and the South broke that treaty. However the South and Confederacy were only unique because they maintained slavery for a few decades after everybody else had reluctantly abandoned it. It's a sad fact that before the 19th century just about every society on Earth had slavery in one form or another. Contrary to popular belief, it was not just the white man who was guilty. Slave economies could be found across the and into . Black people in some parts of enslaved each other. Many of the African slaves who were sent to the west were rounded up by their fellow Africans and sold. was the biggest offender, and it still is; over a hundred million people still live in financial bondage there, that's more than the population of the . During the 19th century the experienced mass immigration from , and many other European countries. These people were forced to live in abject poverty in housing worse than southern slave quarters. These people were technically not slaves; they were free to leave any time they liked, but as a pundit at the time put it: "An empty belly is a darn good reason to stay." To suggest that the Confederate flag is nothing more than a symbol of slavery is hypocritical, defamatory and false. I suspect that the current controversy over the modern use of the Confederate flag is engineered by cultural Marxist think tanks. I've written many times about other similar events where conflict, resentment and division are deliberately whipped up out of nothing, see background links below. This is a form of mind control and we must resist it. So please fly the Confederate flag if you want to. Don't let anybody stop you; it's completely harmless.
See here for background: http://hpanwo-voice.blogspot.co.uk/2013/01/discrimination-against-christians-2.html.
And: http://hpanwo-voice.blogspot.co.uk/2013/11/school-calls-8-year-olds-racist.html.
And: http://hpanwo-voice.blogspot.co.uk/2015/04/anti-feminist-women-banned.html.
And: http://hpanwo-voice.blogspot.co.uk/2014/11/sexist-comet-shirt.html.
Posted by Ben Emlyn-Jones at 13:33

Just another token symbol used to undermine and divide. From a sociological perspective and especially in the US media such a token symbol can be falsley rebranded and I am aware that the KKK sometimes uses this flag in a subversive tactic rebranded under violence. Now, what was nothing to do with slavery etc is now presented as being unacceptable and U.S history is likewise presented as some kind of fictional event despite the rebranding of it being the real and very serious social travesty.

Unfortunately the KKK have abused the Confederate flag for their own agenda, as is often the case. The Swastika was originally a pagan symbol of well-being. I try to emulate Bill Hicks' joke about the American flag.

I agree, X, that all flags are symbolic, totemistic, and potentially used against us. Also though, looking at the wider context, to many within the US and elsewhere, this flag is representative of the right of 'rebellion', anti-establishment values, dissent, recognition that governments can act tyranically and, by association, that the US constitution 2nd amendment justifies the bearing of arms against government tyranny. This amendment is in itself an extension of The English Bill Of Rights of 1689.
I would also suggest that it is no coincidence that all of these matters come to the fore around the time of the 800th anniversary of Magna Carta. Our media circus is currently in overdrive and determined to redefine, along with the puppet political machinery, our so called 'unwritten Constitution' in order to tell us what our rights are.
IMHO this whole fiasco is just one more thinly-veiled disguise in a series of thinly-veiled disguises on a road of a death-of-a-thousand-cuts in a bid to try to remove, once and for all, what we know as Common Law, which historically and currently is a big obstacle to government tyranny and the NWO.