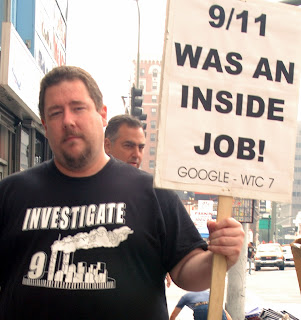 A few days ago I attended a 9/11 Truth group meeting in . There is no "official" 9/11 Truth group per se in , but each country has its principle organizations and if you Google "9/11 Truth " you'll come first to the pages of this website: http://www.911forum.org.uk/. I've been on their mailing list for some years now and when they invited me to an informal meet-up in a pub, a "brainstorming event" as they called it, I took the opportunity to go. I thought it would be an interesting experience seeing as I had so many differences with members of that group when I was closely involved with them many years ago. Soon after , a chapter of the group was established in run by a rather dour and aloof individual who came from out of town. He was willing to work with me but objected to my interest in "other conspiracy theories!" For example I once brought up the subject of UFO's at a social evening and he really didn't like it. Afterwards he approached me privately asked me not to mention UFO's again saying: "It makes us look bad to be associated with craziness like that!" (Ironically the UFOlogist Bryce Zabel once wrote an article called UFO's and 9/11 Truth Don't Mix which made the exact opposite point for the very same reasons; that the UFO scene was discredited if its proponents also professed a belief in 9/11 being an inside job). Joshua Blakeney, a British 9/11 researcher based in , compares the 9/11 Truth movement to the gay rights campaign. There are some gay rights activists who wear suits and stand in elections and are interviewed on TV where they talk calmly, behave professionally and never swear; and there are others who dress in pink wigs, fishnet tights and tutus, and who parade though the streets singing Abba songs. As it is with 9/11 Truth. The "UK 9/11 Truth group", meaning the organization I'm talking about here, always tried to project a public image of being very centre left and middle class; they struggled to divorce themselves from the rest of the Conspirasphere. Perhaps they hoped that if they maintained that poise for long enough then one day The Guardian would agree to investigate 9/11 Truth.

This was the preconception that I had as I took the coach to and headed for the venue, a pub in that I'd been to before. I was dismayed to see a pair of bouncers on the door; this was the first time I'd seen bouncers active during the day. Perhaps this is just because it was Saturday afternoon and there were some big football matches on. The pub was large and packed so I wondered how I would find the people I was looking for. It's been so long since I'd been anywhere near a 9/11 meeting that I doubted if anybody I knew would still be involved. I walked round and round the bar wondering what 9/11 Truthers looked like; could I pick them out by appearance alone? When I located them, they were indeed all strangers and fairly non-descript. There was a jolly old lady whom I immediately warmed to, and a cluster of younger men and women. One of them was Ukrainian and was a software engineer and there was an Italian woman, but apart from that they were all native British. One old man was sitting in his chair fast asleep and remained so for the entire meeting. After an unceremonious period where we sat and chatted with our drinks we began our formal meeting; luckily the pub was a Wetherspoons conversational one where TV and music are banned. Somebody volunteered to be chairman or "facilitator" as they termed it, and we began. Everybody introduced themselves; there were about ten of us. After that we all tabled a series of subjects to be addressed in proceedings and I was surprised that the Italian lady immediately said "chemtrails". I was waiting for the rolling eyes, the heads turning away, the angry mutterings, but they never came. Chemtrails were added it to the agenda in all seriousness. Others suggested anti-Austerity, vaccines for pregnant women, GMO's and water fluoridation; one man wanted to bring up how 9/11 fits into the Order... again there was no negative response from the people round the table. Amazingly they even tolerated his suggestion of Holocaust revisionism. There was also some debate over whether the group should change its name from "9/11 Truth" to "9/11 Justice" seeing as we've proved our point in dismissing the official story of nineteen hijackers. Somebody wanted us to become "We Are Change London" seeing as 9/11 happened a long time ago. I suggested getting them involved with We Are Change Manchester which is the body behind Critical Mass Radio, see HPANWO Radio in the links column. We also had a talk about tactics; should we confront people in power and film ourselves doing it? Everybody was deeply concerned by the government's attempt to curtail "non-violent extremism" as am I. This could include belief in so-called conspiracy theories of all kinds' David Cameron specifically mentioned 9/11, see: http://hpanwo-voice.blogspot.co.uk/2014/10/alan-henning-killed.html. The next subject on the list was "disunity" in the 9/11 Truth movement and I talked about my experience of being attacked over Dr Judy Wood and Andrew Johnson, see: http://hpanwo-voice.blogspot.co.uk/2013/09/the-911-civil-war.html, http://www.checktheevidence.com/cms/index.php and: http://drjudywood.co.uk/. Everybody nodded in understanding and agreed that the abuse of these ideas and those who believe in them was highly unfair and counterproductive. I was astounded. I had gone to the event expecting to have to fight my corner over this issue and end up being ridiculed or even completely rejected; and here they were agreeing with me, appearing to be on my side. It's hard to say because it's been over ten years since I had anything to do with these folk. It may simply have been that this particular cluster of people are from a particular tendency that is on the more open-minded wing of the " 9/11 Truth group". However I can't help hoping and wondering, has the 9/11 Truth Movement come of age? Perhaps we have seen the last of these ridiculous and destructive witch hunts against anybody who is "thermitically incorrect".
See here for background: http://hpanwo.blogspot.co.uk/2015/04/richplanet-2015-tour.html.
And: http://hpanwo-voice.blogspot.co.uk/2011/10/dr-judy-wood-in-brighton.html.
Posted by Ben Emlyn-Jones at 14:54

so no belinda mckenzie or ian neal at the meeting then? i really would like to know why the organisers of the UK 911 truth campaign are not doing anything these days?has their intelligence budget run out?

there are so few of us. But hey! we wont swap truth for trust in authority so quickly.

We have to recognise ourselves as a minority .... and one that has always existed in human mass culture :)