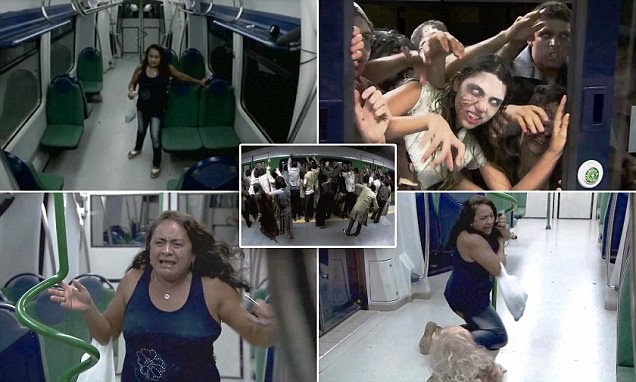 I've been writing a lot lately about incidents which on the surface appear to be innocent pranks, but might have a darkly serious undertone to them. I've also been examining the subject of zombies and how they are being portrayed as real or semi-real in society; see background links at the bottom. These questions have arisen recently in a Brazilian reality TV show. The programme is of the "hidden camera" variety very similar to Trigger Happy TV or Beadle's About, but is far more extreme. The intention is to play practical jokes on unknowing members of the public for the amusement of the viewer. A recent episode features a woman who is travelling on an underground train. She is sitting in the carriage alone when it pulls into a station and the lights flicker. Noises from the movie Jacob's Ladder are added to the soundtrack for macabre effect. From the outset the passenger senses that something is amiss; she stands up and crosses herself, indicating that she is of a generally nervous disposition. The doors do not slide open as they should when the train is at a station. The passenger hammers on the doors saying: "Open up! I want to get out." The driver then announces on the tannoy that the train is suffering some technical problems and apologizes for the inconvenience. He assures everybody that they'll be fixed shortly... but then suddenly he pauses and begins crying out: "What the...!?... Get out!... Help me!" The passenger looks alarmed. The lights switch off completely and when they come back on, to her horror the passenger sees a group of Romeroesque zombies pressed up against the windows on the platform side. They are looking at her ravenously and pushing their hands through the ventilation gaps. The passenger screams in terror and desperately tries to force the doors on the opposite side of the carriage. She becomes completely hysterical with panic. She kneels down and prays desperately, weeping with fear. As she does so we see that under the cover of darkness when the lights were out, one of the zombies has managed to enter the cabin and it crawls obscenely towards her. As it reaches out to grab her she jumps up and runs to the far end of the carriage. At that moment the doors open and the zombies crowd in, but a second door is left unguarded and the passenger dashes out of it to safety. The jape is then repeated with several other people, see: https://www.youtube.com/watch?v=5IOSVhfG79U.

I wondered if this scenario could all be staged and the victims are just actresses pretending to be frightened. I hope that's the case; however they look genuine to me. If this is a real set-up then the programme's producers should feel ashamed of themselves. I don't find it entertaining to see people truly thinking that their last moment on Earth has come, and that their demise will be one of being devoured alive by the carnivorous undead. This experience could have left her mentally scarred for life. Not just mentally either; she might have had a heart attack and died. What if she'd been armed? In gun control is more stringent than in the , but far weaker than in the ; many people still carry firearms for self-defence. In that situation she'd be justified in shooting the "zombies" which could result in the death of the actors. Then again she might consider shooting herself to end it all before having to endure the agony of being dismembered and eaten; one of the characters in George A Romero's Day of the Dead does this. However there's another issue which is relevant whether the scene was real or not. Is the TV programme being used as a cultural experiment? The powers-that-were are trying to engineer our minds to become used to the presence of zombies, whether this symbolizes a sub-social underclass, victims of disease or a transhumanist golem; see background links below. The manipulators will be analyzing that scene frame-by-frame to assess that poor woman's reaction to the attempted zombie assault. They will also be sizing up the response of viewers, which is the reason for articles like this, see: http://www.mirror.co.uk/news/world-news/cruelest-prank-ever-woman-left-5435850; notice the social media comments section and opinion poll? Of course this blog post will be one of the reactions they'll be studying too, in which case I hope they realize that their scheme will fail because people like me are on to them! They will not have their zombie apocalypse, whatever that means in practical reality.
See here for background: http://hpanwo-voice.blogspot.co.uk/2015/03/islamification-in-asda.html.
And: http://hpanwo-voice.blogspot.co.uk/2015/04/suppressed-evidence-of-giants.html.
And: http://hpanwo-tv.blogspot.co.uk/2015/01/real-zombies-2015.html.
Posted by Ben Emlyn-Jones at 18:22

Hi Ben. This is a subject that really interests me. I've often wondered who some of these 'Zombie Run' esque events are organised by under the guise of a harmless day out, a bit of fun?. Programs like this are really disgusting, it's almost the equivilent and return to of the crowds that gathered to watch a hanging or public torture in the not too distant past. This type of program introduces sadism in a tongue-&-cheek manner, but as you say, what's the real motive here other than to make someone look like a cu*t, and worse frightened to death. I think there is a greater issue here intimately connected nevertheless. It's the bismirching of sadism even when people don't mean it, mimicking-psychopathic (which still has the same effect. Like the neo-punks and neo-dark-metal that have all the studs and satanic symbolism but when you put the subtitles on their videos its hillarious because they are lyrics like: "I remember our first kiss under the blood red moon"..It's worth trying Ben. My point is is that the whole Zombie thing 'cult of the dead' as popular culture is worrying because it's all for show, it bismirches and trivializes the name of cruelty and sadism. It's the same as the non-empathetic training given to those in charge of our security services and multi agency agenda Ben

By the way film directors like Romero (whom you mentioned) unlike these new portrayals never trivialized the whole zombie thing, the films although entertaining and threaded with a sense of humour never trivialized, his films were very thought provoking, unlike the cheap-shot tactics of sh*t rate T.V like the one discussed.

Glad you're a "Dead" fan too, X. Yes, Romero's films are all as intelligent and thought-provoking as they are terrifying. I'll have far more to say about the spread of zombie culture soon. There are "zombie survival" training courses you can go on which I'm going to go on hopefully. They're running one in a Reading shopping centre! It looks a bit like a mixture of paintball meet Supermarket Sweep!

HI Ben. Sounds interesting, be sure to let me know if you go to it.