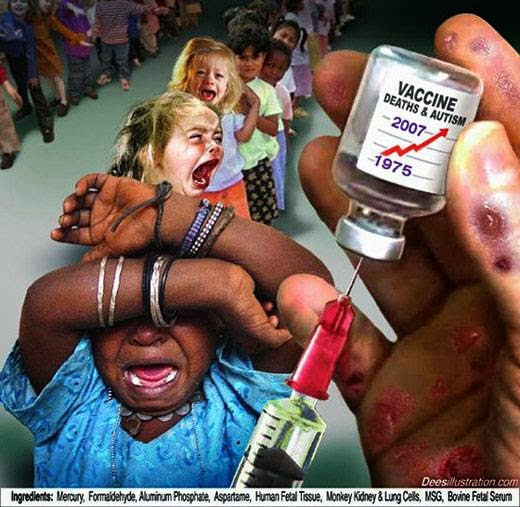 has always given me the impression of an advanced streak of authoritarianism; only yesterday I was describing how they prosecute people for abstaining in elections, see: http://hpanwo-voice.blogspot.co.uk/2015/04/not-voting-reply-to-thomas-g-clark.html. When I visited the country myself a few years ago I noticed there were generally far more police around on the streets than in . A few days ago the prime minister announced that any parent who refused to give their child the full schedule of vaccinations would have their benefits cut. At the moment up to ten percent of Australian parents decline vaccines because of their fears about its health risks; I share their concerns, see background articles at the bottom. I gave my own daughter the MMR jab in the mid 90's, but if I'd known then what I know now I would definitely not have done so. Abbott has spoken at a press conference where he states that vaccination in is still not compulsory. This is very devious of him and an insult to our intelligence; he knows as well as most other people that for millions of families on low or even moderate income, threats to withdraw benefits as punishment for non-compliance is in effect an act of duress, see: http://www.bbc.co.uk/news/world-australia-32273992. I think I can guess where this all started. There's a very noisy character doing the rounds called Dr Paul Offit, see: http://paul-offit.com/, who has no qualms about wielding the law as a weapon to make people vaccinate themselves and their children. This divides him from some of his fellow medical Skeptics; others, like Dr Ben Goldacre, think it would be counterproductive to coerce people to vaccinate against their will and simply recommends scientific education. Offit does not agree and is unequivocally in favour of outright brute force. He's an American and in the the legal position on forced vaccination varies depending on which of the states you live in; Offit has petitioned state legislatures to pass acts of obligation on vaccines and also would like to see the federal government wade in and enforce vaccination nationwide. As I said Offit is American, but he also seems to be very keen to poke his nose into the affairs of other countries, including the , see: http://hpanwo-voice.blogspot.co.uk/2014/01/benefit-cuts-for-mmr-dodgers.html. I would not be surprised if this new move in was inspired by Offit's lobbying. The rise of dependency on the state for a living has made such actions far easier. No laws of literal enforcement need to be passed, just these "no jab no pay" policies. I wonder why it is that if vaccines "are safe!" then why is it necessary to bludgeon people into taking them this way? It's a very contemptuous and condescending way to treat people. Let us have an open and honest debate on the subject and then we can make up our own minds. We are thinking human beings, are we not?... But of course, they won't do that. They can't because they know that these concerns are real and justified. If the truth ever came out a multi-billion dollar industry would crash and a covert biological weapons delivery protocol would be exposed. This is why they crucified Dr Andrew Wakefield, or "Andrew Wakefield" as they insist on calling him. They had to make an example of him to other healthcare professionals who may be considering apostasy.
See here for background: http://hpanwo-voice.blogspot.co.uk/2014/02/us-and-uk-governments-vaccine-lies.html.
And: http://hpanwo.blogspot.co.uk/2009/04/emergency-swine-flu-meeting-with-ian.html.
And: http://hpanwo-tv.blogspot.co.uk/2015/01/real-zombies-2015.html.
And: http://hpanwo-voice.blogspot.co.uk/2009/11/jabbers.html.
Posted by Ben Emlyn-Jones at 18:34