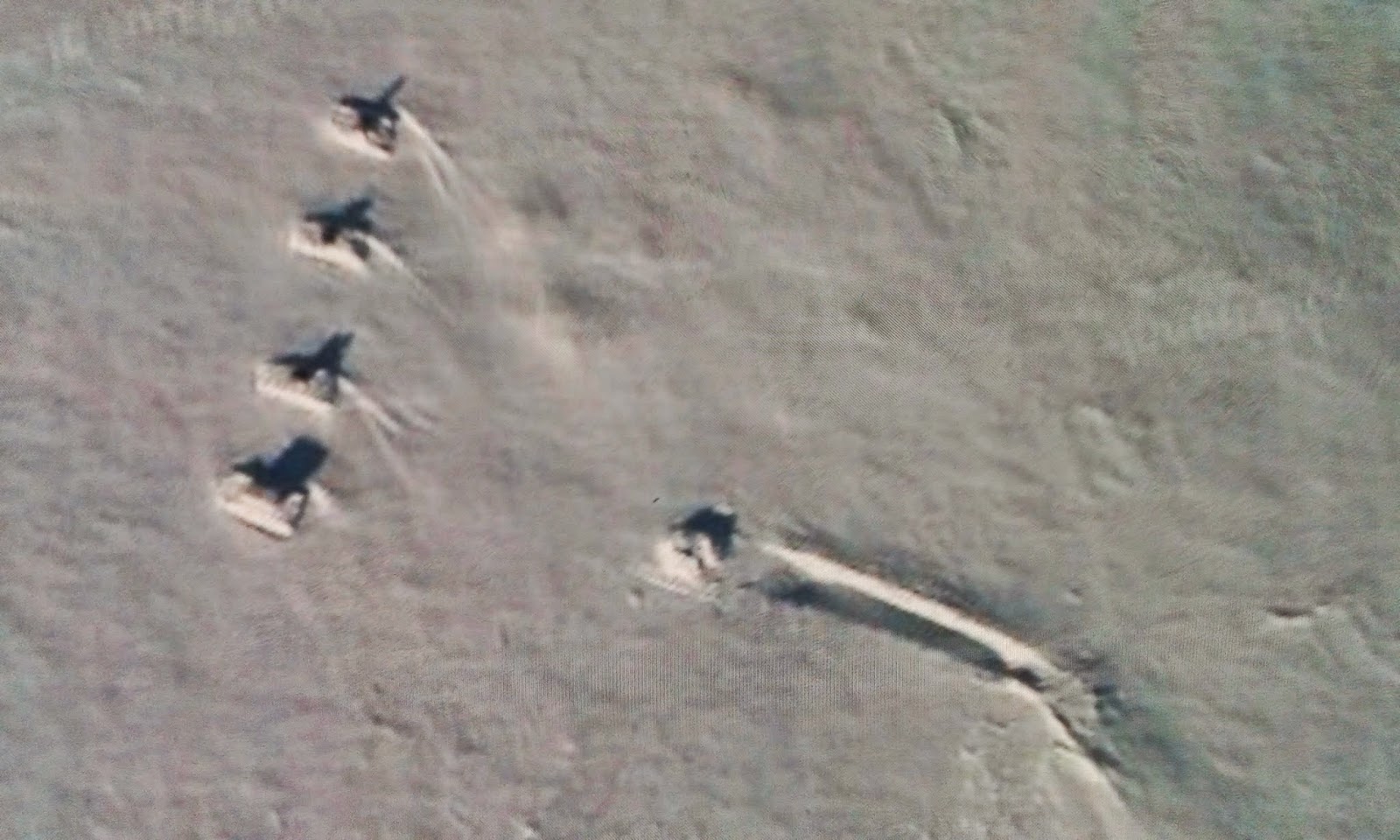 It's only a few weeks since Third Phase of the Moon reported on a new "", a supposed UFO crash in the wilds of . News on that event has now dried up, see: http://hpanwo-voice.blogspot.co.uk/2015/02/new-roswell-in-canada.html. However more news has just emerged of another similar case in an even more remote and inaccessible location, . The source for this information is actually Google Earth. I have followed the instructions on Third Phase and have verified the basic information on the broadcast. is a continent bigger than that is almost entirely covered in ice and snow; this is because it's located in the south polar region of the Earth so it's very cold there. The temperature rarely rises above freezing and can plummet to minus eighty. Nobody lives there and there are no large land fauna except penguins. Nevertheless a few thousand people work there at various scientific research stations dotted around the continent. Over half of them are based at McMurdo Station, a large self-contained American settlement on the coast of an island on the , which is frozen over for most of the year. The base can be found on Google Earth in the search box and at grid reference: 77°51′S 166°40′E, and there are even a few stretches of Street views. Using the Google Earth scale for all dimensions, a couple of miles along the coast from McMurdo Station is Scott Base, a smaller settlement run by . The location of interest lies about two miles northeast of Scott Base on the to the east of the island. We see a structure of hexagonal shape lying at the end of a furrow of snow about three hundred feet long, judging by the map scale. The artefact is roughly thirty to forty feet across and white in colour. A hundred yards or so to the east stand a row of oblong objects. These are evenly spaced about a hundred feet apart and are slightly bigger than the hexagonal structure. These four objects have been described as "tanks" because they have a main body with a superstructure on top which could be a gun turret. There are some snowdrifts around them and no tracks behind them, indicating they've parked been there for some time. These structures are visible in the second highest to minimum degree of magnification; the highest zoom-in shows nothing but a plain of empty ice and snow. This indicates that the two photos were taken at different times and that the five objects are temporary and have either recently arrived, or recently been removed. There are some photos of the area, but they're taken a few miles away and all of them point north towards the volcano at the centre of the island, . The programme presenters compare the possible crash site to the scene in the 1951 film The Day the Earth Stood Still in which a flying saucer lands and a military taskforce surrounds it in case the aliens inside are hostile, see: https://www.youtube.com/watch?v=eITSTWfs6n4. 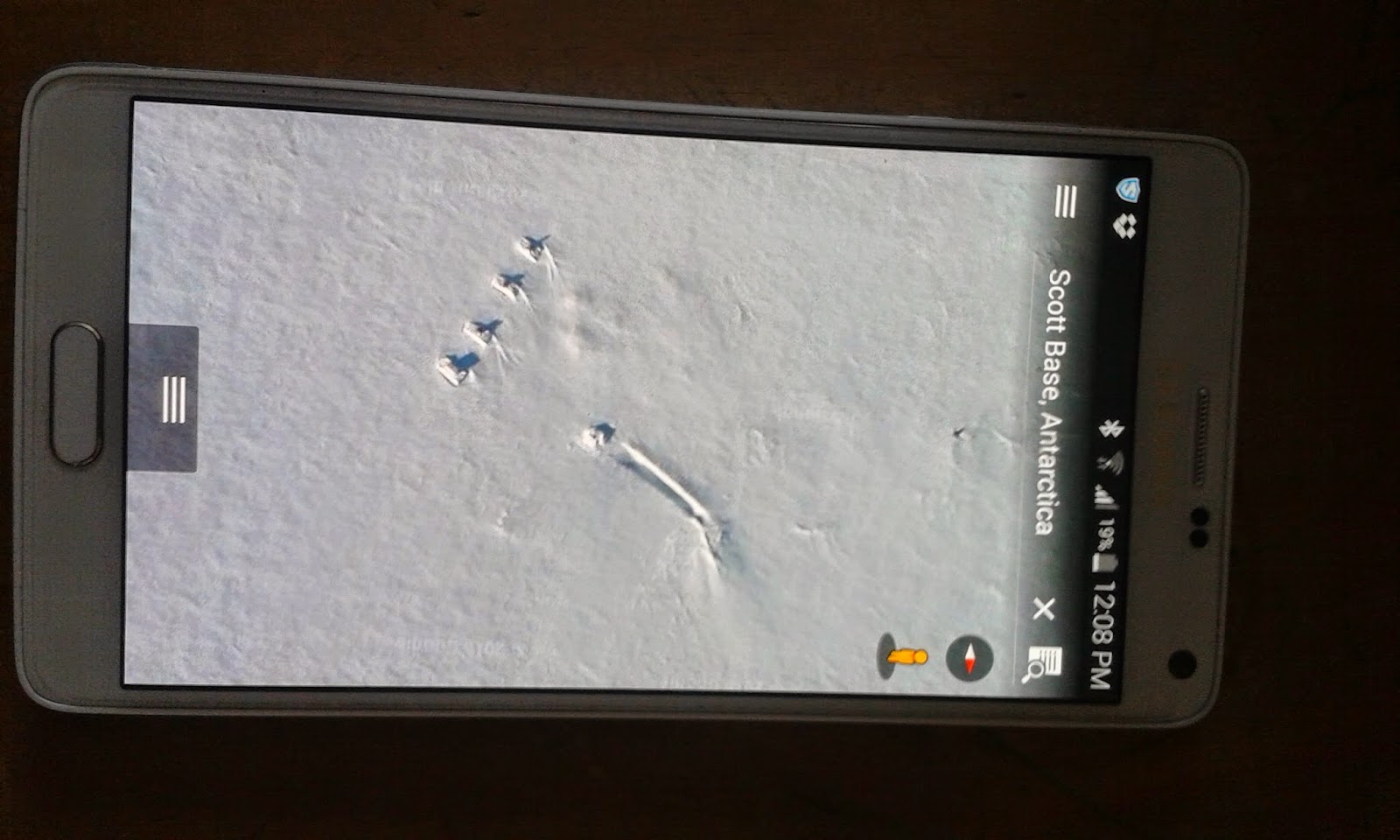 The Third Phase presenters speculate a lot during the programme. They accuse Google of covering up the information; however I'm writing this two days after their video was uploaded and the image in question is still available. A friend of mine sent me the screen shots above in which you can see more details. If the four rectangular objects are tanks then they're of a make not in common use in any of the militaries of the world. The biggest tank ever built is the Panzer VIII Maus, but only two were ever constructed, both in 1944 by Nazi Germany, and the only one still in existence is in a museum. It was thirty-three feet long, definitely much smaller than these objects. Also no modern tank has matched the size of the Panzer VIII Maus. So maybe they're something else. It's too soon to say for sure. We don't know what any of these objects are and there's not enough information to be sure. The United States Antarctic Programme has a website and there is no suspicious activity on it that I can see. It includes live webcams of McMurdo Station and the two other American bases on and they appear to be working normally, see: http://www.usap.gov/videoclipsandmaps/mcmWebCam.cfm. I'm keeping an eye on this webcam for any unusual activity. If we see it suddenly go down, that might be an indicator that something is going on at the base that the authorities don't want us to know about. We need more information about this anomaly before making statements about whether this is a real UFO crash-retrieval. I am in contact with a person who works at McMurdo Station, although I've not heard from him for a while and don't know if he's there right now. He's American and might have gone home to the on leave. However he knows me because he listens to HPANWO Radio (which means I have listeners on every continent of the Earth now!), so I'll ask him if he knows anything about it. If anybody else reading this has friends or family currently in please get in touch with them and see if they know anything about this alleged UFO. I'm not turning Skeptic on you; I do take the possibility of an "Antarctic Roswell" very seriously. This revelation by Third Phase may well be a real one. The frozen continent at the bottom of the world is indeed the home of many secrets and cover-ups, for example, see: http://hpanwo.blogspot.co.uk/2008/07/jack-of-antarctic.html. There are also said to have been nuclear bomb tests there and activities relating to esoteric energy and weapons systems. There are reports of paranormal activity in too, including Bigfoot-like creatures. The Third Phase of the Moon programme linked above also examines some curious formations on the top of a hill overlooking McMurdo Station. So it wouldn't surprise me if there had indeed been a UFO crash retrieval there. Maybe pictures of this secret incident were accidentally captured and uploaded to Google Earth. This is interesting information but it needs to be explored in more detail so we know exactly what's going on here. I have a strong feeling that 2015 will be the year of ET Disclosure... if such a thing is possible, see background links below. If Disclosure is about to happen then the solution to this mystery might come sooner than many people might expect. It could even be the long sought after "trigger event".
See here for background: http://hpanwo-tv.blogspot.co.uk/2015/04/ufo-disclosure-2015-first-three-months.html.
And: http://hpanwo-tv.blogspot.co.uk/2015/02/energy-politics-and-ufos-2015.html.
And: http://hpanwo-voice.blogspot.co.uk/2015/02/the-roswell-slides-to-be-revealed.html.
Posted by Ben Emlyn-Jones at 18:14

It could well be something mysterious Ben. However, could it be a Submarine conning tower broken through the ice?

'The Thing' springs to mind.

True, Steven. That is ice-covered sea.