Will the Queen Abdicate? 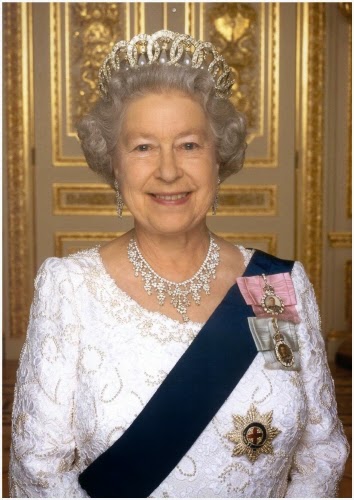 In just a few days the British Habsburg Annunaki Reptilian, more often known as Queen Elizabeth II of , will make a ten minute televised speech to the nation and commonwealth, something she has done every Christmas Day since 1957; although of course a lot of the content is recorded in advance. Every year there is intense speculation about what she will say and this year all bets are off after a run on the bookmakers Coral; this happened when they offered odds of ten-to-one that she will announce her abdication, see: http://www.dailymail.co.uk/news/article-2877751/Bookies-suspend-betting-Queen-abdicating-Christmas-Day-speech-flurry-bets.html. It is extremely rare for an English monarch to deliberately or willingly step down; they almost invariably die on the throne. If the Queen were to abdicate she would only be the second sovereign to do so in all of British history, and ironically the only other would be her own uncle King Edward VII who relinquished the throne in 1936 so he could marry his divorced American lover Wallis Simpson, in the UK forever labelled "Mrs Simpson". A Royal abdication by "Her Madge" would strangely come just a year after the pope resigned, another event virtually without historical precedent, see: http://hpanwo-voice.blogspot.co.uk/2013/02/the-pope-quits.html. However, as the Coral spokesman said, there's no smoke without fire. Despite the extreme privacy under which the content of the Queen's speech is kept before the broadcast, have rumours leaked out? If so, why would the Queen suddenly quit? One possibility is for health reasons; the International Business Times has reported that the eighty-eight year old Queen has been displaying the early symptoms of Alzheimer's disease, a tragic condition that causes progressive brain deterioration and eventually death in elderly people. According to the online newspaper, Elizabeth II has been found wandering the grounds of late at night completely lost and confused. She also has trouble remembering the wedding of William and Kate, her own grandson and his wife. She also apparently gets Prince Charles and Prince Philip confused, her son and husband. This is a sad affliction I observed in my own great-grandmother before she died. According to the IBT there is a conspiracy among the Palace staff to keep the Queen's condition a secret, but that it has leaked out. If she does indeed have Alzheimer's then obviously there's no chance she will end her life in some cheap and grotty council-run care home like most other suffers of the disease do. Her memory will deteriorate and so too will her language skills and other mental abilities until she passes away, but in that time she will be maintained by every piece of medical technology known to man. Already there has been signs that Charles and Camilla have been taking on a lot of the roles that the Queen used to do, as have William and Kate; indeed William had to step into the Queen's shoes to attend the fiftieth anniversary of the independence of . Charles himself is no spring chicken today and might like his own shot at kingship before he himself starts to lose his marbles. However, there might be more trouble brewing for which the Queen might want to be safely out of the way from if it strikes.

In September 2012 a skeletonized body was found buried beneath a car park in ; the thirty year old male had died in the fifteenth century from a fractured skull, probably caused by a blow from a weapon. In life he had suffered from major spinal problems that must have been very painful and had left him with a hunchback. The body was exhumed and examined and the truth was finally confirmed by DNA analysis, the body was that of King Richard III whose grave had been lost since his defeat and disgrace all those years ago. He had died in the Battle of Bosworth Field in 1485, ending the long domination of the Plantagenet dynasty. The victor in the battle, King Henry VII, took over from him, beginning days of the House of Tudor. However this DNA test also revealed something unexpected; there was a break in the male line of their common ancestry. It turns out that John of Gaunt, the grandfather of Henry VII, the first Tudor king, was not really the son of King Edward III after all; Henry's grandmother, Queen Philippa of Hainault, must have had a bit on the side, and it was he, not King Edward who was Henry's grandfather. This would mean that none of the Tudors would have had the right to rule. But it gets worse; if the Tudors were usurpers then so are the House of Windsor because they themselves derive their own right to the throne from the Tudors through marriage and descendence. The geneticist revealing this news is hasty to stress: “We are not in any way indicating that Her Majesty should not be on the throne.” But can he really say that? I suppose it's an instinctive response brought on by courtesy over the obvious implications of his discovery, but I can well imagine that some constitutional scholars are right now fidgeting nervously, perhaps cursing the day modern genetic technology was invented, see: http://www.express.co.uk/news/history/542802/The-Queen-royal-throne-DNA-shock-Richard-III-genetic-discovery. If somebody made the decision to challenge the Queen's right to rule they would have a case. There could even be a plea from one of the living descendents of the Plantagenets, perhaps the individuals who helped the scientists test their DNA to identify Richard III's bones. Would any of them like the idea of being King or Queen? This is not the first time there have been challenges to the Queen's right to rule; in fact another has recently come from a Brother Porter of mine, see: http://hpanwo-hpwa.blogspot.co.uk/2014/01/a-hospital-porter-is-king.html. However this new threat is far more serious because it involves hard scientific evidence, the same kind the police use to identify murder suspects. If this evidence is good enough for a criminal prosecution then why should it not be applied to the legitimacy of the monarchy? After all, it's her own Crown Court. The only way to find out for sure is to watch the Queen's speech on Christmas Day; if she does announce that she's jacking it in then you can be sure it will be one Christmas speech to remember. Will the bookies open before then...?
Posted by Ben Emlyn-Jones at 19:31