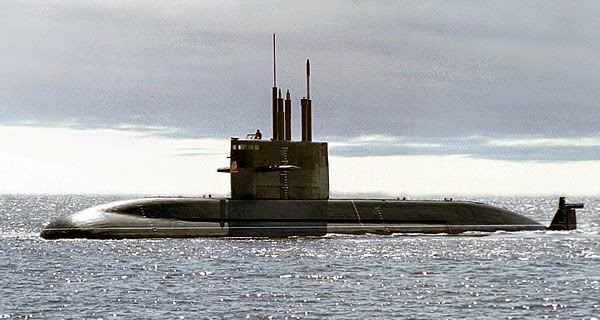 All over Europe in the last few weeks odd things have been going on involving the presence of strange submarines; there have been at least two such incidents. The first was in in October. Several members of the public called the police to report sightings of a submarine in Kanholmsfjärden and , two large lagoons on the coast just a few miles from the capital ; somebody even took a photograph of it. The Swedish admiralty immediately organized a full-scale submarine hunt involving helicopters, minesweepers and special stealth boats. A nearby electronic intelligence post picked up encrypted digital signals being transmitted which are thought to be Russian in origin. This comes at a time when Russian military activity in general is at an unprecedented height. The submarine was never located and must have slipped away; it was almost certainly on a mission to spy on , especially on a naval exercise that had been in progress. This is not the first time has endured covert maritime gatecrashers of this kind; in 1981 the "Whiskey on the Rocks" incident took place. The Soviet submarine S363 surfaced a few miles from the Karlskrona Naval Base; it had been damaged after running aground. The Swedes sent an officer to board the submarine and demand an explanation from the captain. The captain claimed that he'd got lost and entered Swedish territorial waters by accident. This was a flimsy excuse seeing as the submarine must have successfully navigated many hazardous rocks and shoals to reach the point where it was caught. Things got very sticky when the Soviet Baltic Fleet sent a task force to rescue the sub. There was a tense standoff between the Soviet and Swedish navies as the Russian ships attempted to enter the harbour. Matters were made worse when it was discovered that the sub was armed with nuclear weapons. Eventually, after a long period of interrogation, the Soviets were allowed to send in a tugboat and salvage the S363. That was a long time ago in the heart of the Cold War, yet today has regained its status as an A-list world power and it has been expanding and modernizing its navy considerably in the last few years. Far less had changed in the political relationship between Russia and its neighbours than you might think; the Swedes still regard Russia as a threat and still have to deal with Russian espionage in the form of secret invasions by submarines, see: http://www.bbc.co.uk/news/world-europe-29722500. It's not just that has experienced these clandestine invaders from the deep either. The following month there was a very anxious week which began with the passage of a fleet of Russian warships through the . There's nothing illegal in that per se; the ships were careful not to stray out of international waters, yet the Royal Navy still deployed the coastal patrol vessel HMS Tyne to escort those menacing passers-by during their transit. However a few days later somebody spotted a submarine periscope off the west coast of , close to where the Royal Navy's Trident submarines operate. This caused a furore as the military tried to locate the underwater snooper; it had to call on NATO allies to help because the British military has scrapped all its long range antisubmarine aircraft, see: http://www.dailyrecord.co.uk/news/scottish-news/spy-submarine-sparks-search-after-4780565.

In both the Scottish and Swedish cases the intruder was never caught and their identity as Russian is pure supposition. Although is by far the most likely culprit it is far from not certain that they're to blame. The problem is that the submarine is the first weapons platform ever devised in which stealth is its inherent property. The concept of an underwater ship can be found in the ancient world; Alexander the Great was obsessed with the idea, but it was only in the last couple of centuries that the technology has been available to make practical designs for them. The American Revolution and Civil War both involved the use of simple submarines, but it was when electric motors were first used around 1900 that the first capable open water submarines were invented. These had onboard generators to charge the motors' batteries, powered by petrol and diesel engines, which allowed these craft to carry out long range missions far out to sea. Submarines were a devastating ingredient in both world wars. Because they could not be seen, new acoustic detection systems had to be invented to deal with them. Submarines could be found by listening with underwater microphones, called "hydrophones" or by analyzing to the echo of transmitted sounds, called "ASDIC" or "active sonar". The anti-NWO activist Brian Gerrish used to command a Royal Navy antisubmarine destroyer and he described how his ship once detected a Russian submarine two hundred and fifty miles away. The job was made easier by the fact that submarine motor batteries had a limited charge which required the vessel to surface and run the generators at regular intervals, or at least come to periscope depth and raise its snort mast to bring air into the boat; but in the 1950's nuclear power came along which gave submarines an almost unlimited underwater endurance. This was a trade-off though; nuclear propulsion includes a lot of heavy machinery which makes a lot of noise. That noise is easily detected by hydrophones and a lot of the subsequent engineering work in the sphere of nuclear submarines since then has been to make their reactors and powerplants as quiet as possible. In more recent years, simpler and stealthier chemical propulsion systems have been devised that do not rely on surface air and are also far quieter than nuclear power. Today defence analysis sources state that there are almost five hundred submarines in the world; has only sixty-three. This means it's perfectly possible that the strange submarines which escaped the Swedish and authorities were from somewhere else. What's more the defence sources only include submarines known to be in service in the navies of the world's sovereign states. There are almost certainly a good number of submarines that are privately owned. We know of a few used for tourism and there are even one or two submarine "yachts". Drug smugglers also have a couple of submarines, as well as dozens of semi-submersibles, vessels that can sail below the surface of the water with a small portion above. Could ocean-going submarines have been built or purchased privately for the use of persons or organizations? Certainly many corporations and individual billionaires have the money for them. I'm reminded of Hagbard Celine, the leader of the Discordians in Robert Anton Wilson and Robert Shea's novel The Illuminatus! Trilogy. He is captain of the Leif Eriksson, a submarine owned by himself and completely unknown to the outside world. Could one of these "off-grid" submarines have been responsible for the naval activity in these last few months? However, the story is complicated still further when we ask the question: are all submarines even man-made? We all know about UFO's- unidentified flying objects, but fewer people have come across USO's- unidentified submerged objects. These are like UFO's except they're located underwater. They're very like UFO's in appearance and behaviour, so much so that they're probably the same phenomenon in a different medium. Indeed some USO's can fly up out of the water and become UFO's; this was what conspiracy researcher Bill Cooper saw once. He was on board a normal submarine himself, USS Tiru, when he saw a saucer-shaped craft the size of an aircraft carrier suddenly burst out of the sea and fly off into the sky. When his sub returned to port he was "debriefed" by a very rough and abusive intelligence agent who harshly warned him to keep quiet about what he'd witnessed. Another famous incident took place in in October 1967 in which a large object crashed into the sea off the coast of and was seen by multiple witnesses. A massive search and rescue operation was conducted by the Canadian military, but the object escaped. Is it possible that the latest two European incidents I describe above are USO events? Probably not based on the reports, even though some of the UFO websites are reporting it as such, see: http://www.openminds.tv/unidentified-floating-object-hunted-swedish-military/30682. The radio signal intercepted in was described as being Russian. As for the Scottish incident; the witnesses report a distinct periscope, an instrument that almost all submarines have for peering above the waves. Undoubtedly normal man-made submarines can be labelled USO's at times, in the same way aircraft and weather balloons can sometimes be mistaken for UFO's; there is a direct parallel. However there are far fewer familiar artificial structures below the sea than there are in the skies above our heads. When somebody does report an underwater object that doesn't seem to fit with what we know of when it comes to our own submarines, then it behoves us to take them seriously. For now we still have the spectre of looking more and more belligerent and the western powers responding in kind.
Background article: http://hpanwo-voice.blogspot.co.uk/2013/07/replacing-trident.html.
Posted by Ben Emlyn-Jones at 16:45

I think all this amounts to a heightening of tensions for reasons unaware other than to those at the top of the proverbial pyramid. I think it may be a game of chess played by the same hand like 'play against yourself mode' in online chess. I think Russia is aware of this and is anticipating a global maneuver. The underwater UFO link is interesting. It is interesting that some evidence suggests that some recorded Alien tissue samples share genetics with Dolphins etc, how far this evidence can be privileged is one thing but the implications are interesting if it means that the terrain of the Sea may not be Alien to them. Thanks for the artical Ben

You're welcome, X. I get the feeling Russia is not doing everything it's told by their Illuminati lords and masters. Putin refused an IMF loan a few years ago. This is very wise of him. Ireland, Spain and Greece said "yes" and look what happened to them!

Interesting you didn't posit a false flag scenario. Does that reflect an element of British nationalism in your conspiracy ideology worldview. Maybe, maybe not.

Just a short interview and looks like he's written an interesting book.
Is the internet a plot to dumb us down and destroy us, while we regard it as greater freedom?

The internet is only a intrusive as the Mind consciousness of Him/Her operating it. There is much Wisdom and Much trash, wisdom comes from within and without that even Internet Wisdom is Trash