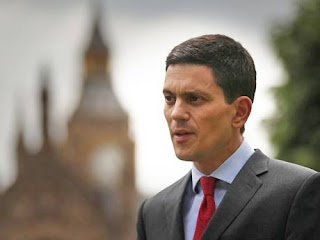 David Miliband has quit as an MP... or is that Ed Miliband?... I can't really tell them apart. The former Foreign Secretary, former Environment Secretary and European Foreign Minister has decided to go and work full time for the International Rescue Alliance. This is not to be confused with International Rescue, the imaginary organization invented by Gerry Anderson for the TV puppet show Thunderbirds. Miliband doesn't have enough personality to match the plastic marionettes which starred in that series. Nevertheless his brother is still labour leader; the clone of David Miliband is still in place... I'm only half-joking when I say "clone".

According to the official political media, the end of the Cold War resulted in the breakdown of communism. Communism was the "big, bad boogie-man" against which the so-called "Free World" fought for over forty years, and almost destroyed the planet Earth doing so. However the Milibands are both sons of the Marxist theoretician Ralph Miliband; and they're both involved in the Cultural Marxist think-tank The Fabian Society. So, to have this family in such a powerful position in the UK Government makes joke out all the rhetoric shoved down our throats during the "war against communism". It's so crazy! It's like, imagine if you will: in this new War Against Terror, with radical Islamists threatening to wipe us out in nuclear, biological or chemical attacks, the governments of the Western world were funding and arming a radical Islamic state, like say, Saudi Arabia... hang on!