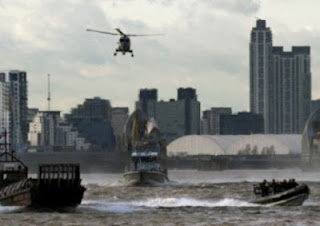 Nick Buckles, the chief executive of G4S has been the subject of a Parliamentary enquiry today. This is because his company has "failed in its duty" to provide adequate security for the forthcoming London Olympics. See: http://www.bbc.co.uk/news/uk-18866153


Personally I'd like to get the Academy on the phone! This looks to me like a staged charade. Buckles didn't fail, he threw it! What's more I imagine he was given some incentive to throw it, like a big cash back-hander. Why? So that the Government now has the excuse to militarize even more than it has done already. See here for background: http://hpanwo-voice.blogspot.co.uk/2012/05/london-olympic-security-measures.html


Now it looks as if spectators at the tournament will have their bags searched by military personnel, rather than a G4S security guard, and this is deliberate. It means that even if the entire Olympics goes according to plan the people will have been conditioned even further into thinking that dealing with soldiers in domestic security and law enforcement situations is normal. What I call "The Military Religion" has a big role to play in this too, see: http://hpanwo-voice.blogspot.co.uk/2012/02/non-military-memorials.html
Posted by Ben Emlyn-Jones at 16:02