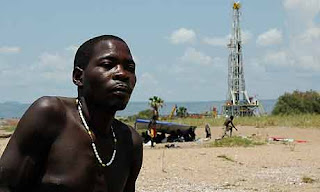 (Thanks to Frank Willis and the YouTube user “The Jungle Surfer” for bringing this to my attention.)

There have been times when I’ve made predictions that have come true. This is not because I’m psychic, but because I have a basic understanding of geopolitics. I made a prediction several years ago that the conflict between Britain and Argentina over the Falkland Islands would kick off again, see: http://hpanwo-voice.blogspot.com/2010/03/falklands-war-ii.html My evidence?: That a new oilfield had been found there. The other day I was watching some YouTube videos about the hunt for the alleged Ugandan war criminal Joseph Kony, like this one: http://www.youtube.com/watch?v=brqIDv16Cgw. This has recently been made into a feature-length documentary Kony 2012. See: http://www.kony2012.com/

Joseph Kony was officially indicted back in 2005 and has been a wanted man way back since 1987! Why now suddenly has all this effort been put in to finding him and bringing him to justice? Could the recently expended Ugandan oil industry be a reason? See: http://www.youtube.com/watch?v=dtCoH3RqBWo It seems that trouble always kicks off wherever somebody strikes oil. Along with the Falklands example there’s Darfur too.
Posted by Ben Emlyn-Jones at 12:36