Misandry in The Big Issue 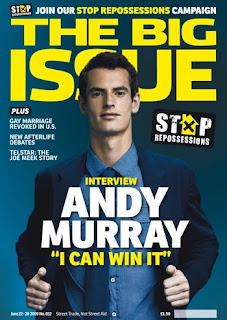 Along with Nexus and Dot Connector I also read one other magazine, The Big Issue. It’s an interesting and lively magazine with a noble mission; it also supports homeless people in a very positive way. However in the most recent edition there’s a segment specially written for Mothers’ Day, which is tomorrow, that annoyed me. It’s a comedy piece about how hard life is for women and mothers and how so much of their ordeal is caused by men. I’ve written into the magazine and this is my letter. I'll let you know if it gets published or I get a reply:

I chuckled to myself as read the article entitled How to be a Modern Mother in The Big Issue of March 12th to 18th. I did appreciate the misandrist humour, even though I am a part of that lower half of humanity, ie: male. I think my amusement was tempered with a terrible sense of regret that such wit is tainted with the perennial double-standard: that it’s socially acceptable for women to make jokes about men, but not vice versa. I know what your rebuttal will be: “But women have had to put up with being second-class citizens for hundreds of years!” But isn’t that all the more reason to break the chain now? How long will it be before the penny finally drops that you can’t fight injustice by cancelling it out with another injustice? All you get is a double-dose of injustice that hurts everybody! So when Fathers Day comes can we have a few jokes about women drivers and women doing DIY etc? If your female readers get offended then give them the same advice that women give us: “Come on, girls! It’s just a bit of light-hearted fun. Can’t you take a joke?”