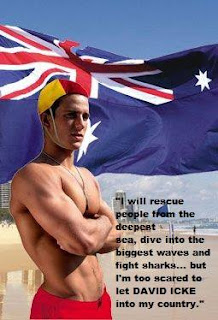 For several weeks now the government of have considered banning David Icke from the country, but no decision was made. It looked like David was safe and the people planning to go and see his shows on his four-stop tour through 's major cities must have been relieved. And then, just hours before David was due to board a flight to , the immigration minister David Coleman revoked his visa. Perhaps this was deliberate to disappoint David and the lecture-goers at the last minute, as well as cause David to spend money on a now useless air fare. Apparently David is a risk to the "health, safety and good order of the Australian people or a segment of the Australian people." God knows what that means. Here is the report from that filthy rag The Guardian. It repeats barefaced lies, like David saying that Hitler was funded by Jewish people, see: https://www.theguardian.com/news/2019/feb/20/conspiracy-theorist-david-icke-hits-back-after-australia-revokes-visa. See here for David's report on the matter: https://www.youtube.com/watch?v=j0rrywXNu8s. It is a predictable pattern. The authorities were influenced by so-called "Jewish welfare" organizations; in other words they cucked out to them. In this case the shots were called by the Anti-Defamation Commission and the Executive Council of Australian Jewry. Their spokesman, Dvir Abramovich, congratulated Mr Coleman on his decision. He said that "anti-Semites and Holocaust deniers will never find a home in ". How many times are we going to have to run through this tedious routine? David Icke is not... repeat not... an anti-Semite. He explains very clearly that Jews are not the perpetrators of the New World Order. This stupidity has been going on now since the early 1990's. Will it ever end? I'm really sorry David's tour has been cancelled at the eleventh hour like this. I wish David all the best for his future endeavours. I'm going to the premiere of his new documentary, but I'll say more about that in a future post. Ironically today is the birthday of Steve Irwin who would have been fifty-seven if he had lived. He was a real Aussie bloke who used to wrestle crocodiles and play with poisonous snakes. Where has that traditional Australian vigour and resilience gone?
See here for background: https://hpanwo-voice.blogspot.com/2017/01/is-david-icke-dangerous.html.
And: https://hpanwo-tv.blogspot.com/2017/06/jews.html.
And: https://hpanwo-voice.blogspot.com/2015/03/david-icke-loses-lawsuit.html.
And: https://hpanwo-voice.blogspot.com/2018/02/anti-semitic-entrapment.html.
And: https://hpanwo-voice.blogspot.com/2018/03/anti-semitic-mural.html.
Posted by Ben Emlyn-Jones at 00:22

I strongly believe that a small Jewish clique which has contempt for the mass of Jewish people worked with non-Jews to create the First World War, the Russian Revolution, and the Second World War. This Jewish/non-Jewish Elite used the First World War to secure the Balfour Declaration and the principle of the Jewish State of Israel (for which, given the genetic history of most Jewish people, there is absolutely no justification on historical grounds or any other). They then dominated the Versailles Peace Conference and created the circumstances which made the Second World War inevitable. They financed Hitler to power in 1933 and made the funds available for his rearmament.Source: And the truth shall set you free p130

How is it right that while this fierce suppression goes on, free copies of the Spielberg film, Schindler's List, are given to schools to indoctrinate children with the unchallenged version of events. And why do we, who say we oppose tyranny and demand freedom of speech, allow people to go to prison and be vilified, and magazines to be closed down on the spot, for suggesting another version of history.ibid. p135

That quote is correct. It's an excellent book. It the best quote to prove how The Guardian has misrepresented David.

Let's not fall into the trap of claiming everything nefarious is being perpetrated by Jews. What about the Jesuits and Freemasons? Ahh, but they all have their grubby roots in the Jewish tribes and babylon. No, a minority of bloodlines chose to follow SATANIC rituals from the dawn of time and were rewarded with power and wealth. They will call themselves anything that furthers their agenda and love to confuse and misdirect us.

Richard, have you seen my video "Jews" and its accompanying radio show and articles?

What David Coleman (Australia's Immigration Minister) did was actually illegal. I spoke with a judge in Europe who deals with Visa bans and unless there was a likelihood that the visit would incite public unrest, that there was a possibility of violence as a consequence, or that it posed danger to the public in some other way, then according to him it is elligal and that Icke should sue. I sure hope he does. We would all chip in to help with legal costs I have no doubt because this is such a huge issue.