This Week in Space 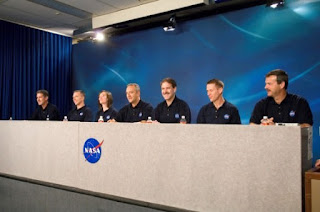 The second week before Christmas 2017 is shaping up to be quite an exciting one for those whose eyes turn skywards. Yesterday NASA announced that they would be holding a press conference to make some "big announcement". They are keeping the subject matter strictly confidential, but they say it is related to the Kepler Space Observatory, a powerful telescope that was launched into space to search for exoplanets, planets that orbit other stars instead of the sun. Bear in mind that NASA have made "big announcements" before that have turned out to be very anticlimactic, see: https://hpanwo-voice.blogspot.co.uk/2012/12/mars-curiosity-historic-announcement.html. Nevertheless this one might be different. They are streaming it live online at ; and I shall be watching just in case. If this is about Kepler then the most exciting thing it could be is an update on Tabby's Star with information that it does indeed have signs of intelligent extraterrestrial life, see here for background: https://hpanwo-voice.blogspot.co.uk/2016/04/mysterious-star-update.html. It would be especially provident because just a few weeks at AwakeCon I did state that the eventual success of SETI is inevitable, see background links below. On the other hand this brief could simply be a cover for a Disclosure announcement!... But that's a bit of a long shot. Source: http://www.dailymail.co.uk/sciencetech/article-5166687/Nasa-make-major-alien-hunting-Kepler-discovery.html#ixzz50zAn3Jto.

In the meantime President Trump has made a speech about NASA proclaiming his vision for the agency and its role in future space exploration. He was surrounded by officials in suits and space veterans in astronaut's uniforms. He declared, just like his predecessor Barrack Obama did throughout his presidency, that the will be returning to the moon with a new manned mission at some point in the future. This is very different from John F Kennedy in 1961 setting a specific deadline for the first moon landing, "before this decade is out", which America was seen to achieve with just five months to spare; July the 20th 1969. Yet fifty years later, with an expanding budget and twenty-first century technology Trump cannot do the same; why not? See my HPANWO Radio interview with Marcus Allen below for details. The president then goes on to say the step after a return to the moon will be a mission to Mars and "someday to many worlds beyond". These grand visions are all very well, but how many of them are fulfilled? And as we wait for the rockets to fly, the secret space programme continues. People have already been sent to Mars and beyond, but not by NASA, see background links. Even more sinisterly, Trump then made a positive but sketchy statement about the military applications of space research. This is worrying when Carol Rosin's discussions with Wernher von Braun are taken into consideration, see: https://www.youtube.com/watch?v=WruCxsh8mfw. After he signed the directive the President is presented with a model spaceman in the hope that the humour will lighten the chilling nature of his speech in the public's minds. Source: https://www.youtube.com/watch?v=fbmGw4sJCpU. (Thanks to Rachel for the information) In another story today it was announced that SETI will be scanning the interstellar asteroid Oumuamua to see if it is radiating anything that might indicate that it is an intelligently-created extraterrestrial spacecraft. This will begin at tomorrow, just in time for a revelation the following day at the NASA press conference. Source: https://www.msn.com/en-gb/news/techandscience/huge-object-passing-earth-could-be-alien-spacecraft-from-another-part-of-galaxy-say-scientists/ar-BBGCPom?li=BBoPWjQ. I have been covering Oumuamua on the space weather slot on the HPANWO Show during the last few weeks. It is a very odd thing indeed; its shape, colour, speed and course make it unlike any kind of asteroid ever seen before. My best guess is that Thursday's event will be none of what I have stated above, but we don't know for sure until the day. Be sure that if it is anything interesting I will write a follow-up article to this one.
See here for background: http://hpanwo-voice.blogspot.co.uk/2017/11/ben-emlyn-jones-on-shamanic-freedom.html.
And: https://hpanwo-voice.blogspot.co.uk/2017/12/ben-emlyn-jones-at-awakecon-2017.html.
And: http://hpanwo-radio.blogspot.co.uk/2016/03/programme-179-podcast-marcus-allen.html.
And: http://hpanwo-voice.blogspot.co.uk/2015/02/man-on-mars-in-this-decade.html.
And: http://hpanwo-radio.blogspot.co.uk/2017/03/programme-227-podcast-stephen-bassett.html.
Posted by Ben Emlyn-Jones at 19:14