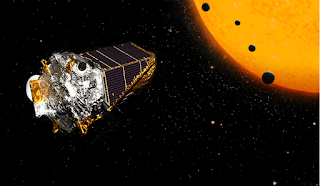 I watched the NASA press conference that has been advertised very rigourously in the mainstream media, see here for essential background: http://hpanwo-voice.blogspot.co.uk/2017/12/this-week-in-space.html. See here for a recording: (coming soon).
The event was streamed live on the internet at this evening. Even before it began I knew by the list of names that it wouldn't be extremely ground-breaking. The panel of experts were Paul Hertz, Christopher Shallue, Andrew Vanderburg and Jessie Dotson. A name notable by its absence was Dr Tabetha Boyajian. If this was some revelation about Tabby's Star then there is no way she would not be taking part. The announcement is that Kepler has discovered an eighth planet around a star called "Kepler 90-I". This is the first star in the universe known to have at least as many major planets orbiting it as the sun does. This discovery was made using a new artificially intelligent application designed by Google. This is very interesting, but not extraordinarily thrilling. However, as I say in the background article above my hopes were not overly high.
See here for additional background: http://hpanwo-voice.blogspot.co.uk/2017/11/ben-emlyn-jones-on-shamanic-freedom.html.
And: https://hpanwo-voice.blogspot.co.uk/2017/12/ben-emlyn-jones-at-awakecon-2017.html.
And: http://hpanwo-radio.blogspot.co.uk/2017/03/programme-227-podcast-stephen-bassett.html.
And: http://hpanwo-tv.blogspot.co.uk/2017/03/ufo-disclosure-2017-what-about-britain.html.
Posted by Ben Emlyn-Jones at 18:43