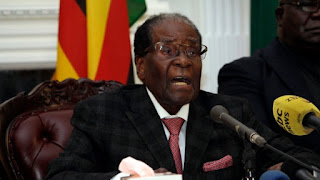 The last seven days has seen a transformation in the southern African nation of that nobody believed was possible. Since 1980 the country has been ruled by the tyrannical regime of Robert Mugabe. During the thirty-seven years Mugabe ruled the economy collapsed causing massive levels of poverty. The currency, the Zimbabwean Dollar, inflated until it was worth just eight hundred millionths of a penny. Over a quarter of the country's population fled, mostly to neighbouring . This included nearly all the white people. Mugabe was a racist (No, you don't have to be white to be a racist!) who treated the country's former white population like pests to be exterminated. He seized all their property and exiled many of them. A large number were killed by his armed militias. Not that you had to be white to be subjected to genocide by Mugabe. When he took power he sent his troops into , the region of the country where the Matabele people live that used to be called . He had the people locked inside their houses and the houses were then set on fire. It's not known how many were murdered like this. Yet within the last week the ninety-three year old dictator was forced to resign by a military coup. Source: http://www.bbc.co.uk/news/av/world-africa-42049592/how-events-in-zimbabwe-unfolded. The BBC describes Mugabe as the leader of the civil war for independence that led to the end of British colonial rule under the Ian Smith government. However, according to Credo Mutwa, the real leader was a man of humble origins called Josiah Tongogara however just before Tongogara was due to be inaugurated as president he was involved in a "tragic road traffic accident". It's lone been suspected that this was no accident and that Mugabe assassinated Tongogara. Unlike Tongogara, whose family were blacksmiths, Mugabe is of royal blood and is descended from the Mashona emperors. According to Mutwa this makes him a controlled puppet of the "black Illuminati", see: https://www.youtube.com/watch?v=4apWOUNOx64 and: https://www.youtube.com/watch?v=va4V1SA2eyk. The same was true of Nelson Mandela, see: http://hpanwo-voice.blogspot.co.uk/2013/12/nelson-mandela-dies.html.

Robert Mugabe's family were very rich and made their fortune from the slave trade. It is a common misconception... spread deliberately for reasons of psychological warfare, that slavery was an atrocity committed exclusively by cackling, moustache-twirling, white heterosexual males wearing pith helmets and wielding whips. Not true; slavery was sadly almost universal in most human societies until the last two centuries and African victims were as likely to be enslaved by their fellow continentals as they were white European invaders. Like all despotic old men, Mugabe has a young and attractive wife. Grace Mugabe met her future husband when she was a secretary in his office. It's likely that the coup was arranged because Mugabe planned to make his wife his automatic successor after he died. Grace's pleasant appearance is probably not matched by her personality otherwise she would not have been chosen by him. The leaders of the coup have instead installed somebody called Emmerson Dambudzo Mnangagwa. He is a member of the same party as Mugabe and so I don't yet know exactly how much positive change will come from this usurpation of power. Is this the ZANU-PF party simply rebranding? Is it merely removing its worn out figurehead of evil so that can have a new soft and cuddly image? Time will tell, but I can only hope that the recent revolution will improve the lives of the ordinary people living within that unhappy land.
See here for background: http://hpanwo-voice.blogspot.co.uk/2016/09/richplanet-show-about-david-icke.html.
And: http://hpanwo-voice.blogspot.co.uk/2010/08/credo-mutwa-attacked.html.
And: http://hpanwo.blogspot.co.uk/2008/04/uk-probe-conference-march-08.html.
And: http://hpanwo-voice.blogspot.co.uk/2017/04/mermaid-attack-in-zimbabwe.html.
Posted by Ben Emlyn-Jones at 16:49

Bullshit. Mugabe, which is E Ba Gum backwards (Yorkshire saying) is a highly professional crisis actor. Zimbabwe doesn't exist you tool. In actual fact it is a huge Lake or should I say a reservoir for most of Southern Africa. Namibia heavily relies on it and they also harvest a unique fish only know to exist in Lake Zimbabwe it is called the Coldken and is apparently very tasty, but quite salty. Apparently, pound for pound, there is more salt in the Coldken then their is in an average ejaculation from a man's penis. Interesting a? Do you like cum?

T. Shelby, I don't normally recommend psychiatrists, but in your case I'll make an exception. Get some pills will you?