Brexit- One Week On 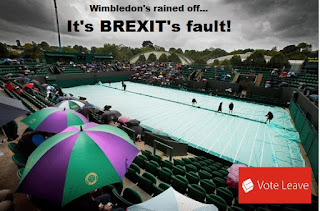 It is now a whole week since the British people went to the polls, and against all the odds and in the face of all adversity won the referendum to leave the European Union. See the background links at the bottom for my coverage of this event. Most of the populace seem to have got used to the idea of Brexit (Incidentally Brexit is a neologism; a year ago nobody had heard the word and now it's on everybody's lips. It is simply an abbreviation of "'s exit from the European Union" and will surely be in the Oxford English Dictionary next year). There are already signs emerging of what Richard Dolan and Bryce Zabel call a "new normal". However, for the political classes the situation is very different. They are still in a state of denial. The exception being Nigel Farage who made a speech in the EU parliament that, even if you don't completely trust him, is like a glass of water after a hike in the desert: https://www.youtube.com/watch?v=MlN9o3g-yuA. All the main parties are in turmoil with a vote of no confidence in the Opposition leader Jeremy Corbyn, which is simply opportunistic Blairites striking while they can. The fact that Corbyn is currently pushing for Tony Blair's war crimes prosecution is another of those David Icke "Just a coincidence, nothing to worry about" moments. The ruling Conservative Party is also running a new leadership contest. Boris Johnson has just stepped down which is disappointing. I'm not a supporter of his, but he would have at least made the process more entertaining. Instead we have the usual line-up of suited non-entities like Michael Gove and Liam Fox, see: http://www.bbc.co.uk/news/uk-politics-36672591. I tried to reassure the Remainistas that the original post-vote financial panic that saw the pound crash by almost fifty cents against the dollar would not last long and it hasn't. The markets have stabilized. In fact, as the economist Peter Schiff has explained, the minor economic ripple caused by Brexit is the least of our worries, see: http://www.schiffradio.com/if-the-markets-were-healthy-brexit-would-be-a-non-event-ep-177/. Following the crisis in the Eurozone since 2008 it is obvious that there are enormous monetary benefits of being completely independent from the European Central Bank, as I reported on last year, see: http://hpanwo-voice.blogspot.co.uk/2015/07/greece-decides.html. is now in a far stronger long term economic position than it ever was before. A symptom of the government's true contempt for the people can be seen in the scheduling of talks to plan a single military force for the European Union. These were timed to start just after the referendum date. The scumbags were so confident they would get a REMAIN victory when it would be too late to stop them. What a narrow escape we've had! See: http://www.breitbart.com/london/2016/06/29/european-leaders-release-plan-eu-army-turkish-membership/. Luckily it looks as if the EU and UK governments will shortly activate Article 50 which will begin the two-year process to remove Britain from the EU, probably even before Cameron's departure after the end of the leadership election in October. Indeed the EU seems more in a rush than . As I said above, it is highly unlikely that the tendency wanting an immediate second referendum will have their way, but this is still just the first shot in what is bound to be a long war. The powers-that-be will back off for now, but will duck down and double back to try again with more crooked methods. As Paul Joseph Watson has pointed out, we will see Brexit blamed for everything by the media. If is rained off... it's Brexit's fault. Your drain gets blocked... it's Brexit's fault. Your neighbour's cat comes home with half its fur shaved off... it's Brexit's fault, see: https://www.youtube.com/watch?v=_72Wbg5tjN0. George Osborne hasn't missed a trick! I predicted, almost to his very words, exactly what he would say about Brexit needing a new array of cuts and austerity, see: http://www.bbc.co.uk/news/uk-politics-eu-referendum-36647006.

On a personal level, I've now recovered from my "happyshock" and calmed down a bit. However, my mood is still strangely manic. I tend not to post much on social media, but my Twitter and Facebook feed are currently covered with status updates and memes; many of which I've made myself, like the tableau above. I explain in the background links that I am under no illusions that this is the ultimate triumph against the New World Order, but it is still such a major pitfall to their agenda. For the first time ever in my life something has happened in the political world that is a tangible, unmitigated and manifest disaster for global Illuminati rule. I hear all the time from people like David Icke that soon there will come a "turning of the tide", a "great transformation" etc. The LEAVE victory is at long last a positive indication that history has finally reached the corner and is starting to turn back. Because this is a new experience for me it has generated feelings that I've never felt before. The sense of justice and vindication is intoxicating. It's a joy that is overwhelming, almost vertiginous. Contemplating it makes me feel dizzy. Whatever happens in the future nothing can take that away; it is done, a fait accompli. I even have images in my head comparing the EU to the One Ring from Lord of the Rings and what happens when it's finally destroyed in . Of course I have been messaged by all the usual Truth-posers telling me that Brexit is a completely controlled event without explaining why. Instead, predictably, they just call me a "sheeple" or "shill" for disagreeing with them. I rationally detail in the background links exactly why I think that this is not the case. Brexit is indeed an unplanned and unexpected deviation from the elite's script and they're struggling to contain it. In the meantime I am working to control my own emotions. I am on a "high"; that's for sure; one that is not logically sustainable in all likelihood. Everything looks brighter and cleaner. Is it just my imagination or do other people look happier too? Obviously there are exceptions, like the left wing sour grapes who are protesting in and demanding the will of the people be overturned. Even Thunderf00t on YouTube has been a right old wet blanket, see: https://www.youtube.com/watch?v=TX0U9i8qnk8. Generally though I do detect a spring in the step of those I pass in the street. Has Brexit given people a new sense of hope, self-respect and empowerment? In his book Homage to Catalonia, George Orwell describes after it was taken over by the POUM in 1936, the movement he fought for in the Spanish Civil War. Every person was filled with a unique euphoria, an unbearable lightness of being. It was the sudden liberation and emergence of a new social contract, a return to that simple sense of fairness we had as children. Orwell was a democratic socialist and I differ with him politically, but he had a sense of decency and honour that excuses him of his mistaken allegiance in my view. Has Brexit given us that same promise of freedom? Brexit may not be the end, but maybe, just maybe... it could be the beginning of the end.
See here for essential background: http://hpanwo-voice.blogspot.co.uk/2016/06/brexit-backlash-begins.html.
See: http://hpanwo-tv.blogspot.co.uk/2016/06/vote-leave.html.
And: http://hpanwo-radio.blogspot.co.uk/2016/06/programme-193-podcast-eu-referendum.html.
And: http://hpanwo-tv.blogspot.co.uk/2016/06/vote-leave-2-count.html.
And: http://hpanwo-tv.blogspot.co.uk/2016/06/brexit-reality.html.
Posted by Ben Emlyn-Jones at 15:25

I think you have expressed feelings which a lot of us share. Not least the mention of the One Ring being destroyed. I actually made a video blog on the subject with readings from The Return of the King of the three points of view described when the Ring is destroyed and Sauron falls. First Frodo's point of view, then Aragorn and the Company at the Black Gate, and finally Faramir and Eowyn on the battlements of Minas Tirith.

This is a moment which will go down in history. The orcs are running around in disarray slashing themselves with their scimitars ~ that's the politicos, mostly Labour, who are self eviscerating themselves in their despair and knowledge that they can't stop it, so they turn on their own people. Such is the outcome of their lies.

Hi Claire. I really hope so and I'm glad you can feel the joy too. Will have a look at your video

'Your neighbour's cat comes home with half its fur shaved off... it's Brexit's fault,'