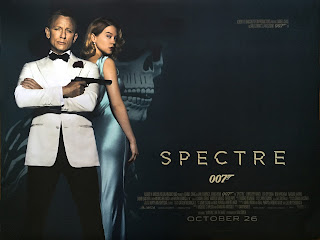 Like most people, I've enjoyed the James Bond films my entire life. They're the ultimate in action adventure bloke-flicks. When I became aware of it I also realized the films, and the books they're based on by Ian Fleming (Fleming himself has an interesting background, see: http://hpanwo-tv.blogspot.co.uk/2015/03/helen-duncan-wartime-psychic-jailed.html), are inherently very politically incorrect and put up a brave resistance to cultural Marxism. However not all the films live up to the quality I expect from the franchise, especially those later in the series. The cause of this decline has been mostly bad casting for the eponymous character; Timothy Dalton was a particularly awful choice. In 2005 Pierce Brosnan, a reasonable Bond, was replaced by Daniel Craig. Craig's first film was Casino Royale (not to be confused with the official 1967 spoof with that title). I didn't think it was very good and the next one, Quantum of Solace, was truly poor. This was despite the bright spark of Judy Dench's brilliant performance as "M", head of the secret service and Bond's boss. At that point I gave up watching Bond cinema releases altogether. However, after Sam Mendes became the director the films have dramatically improved. I watched Skyfall on DVD and really liked it. Then came Spectre.

Spectre was released last year as the most expensive James Bond film ever made. It also featured the world's biggest pyrotechnic explosion ever seen in cinema. The title of the film refers to the organization "SPECTRE". It is an old nemesis of James Bond, an international criminal network last appearing in Diamonds are Forever in 1971. It is run by an evil genius called Ernst Stavro Blofeld, famous for being accompanied everywhere by a white cat. The film Spectre has all the features I've come to enjoy from Bond; great camerawork and excitement, stunts and special effects, emotion and sensuality, intrigue and mystery. However, this film caught my eye in a way none of the others have before because of its breathtaking conspiratorial awareness. Paranormal and anti-New World Order themes have appeared in James Bond stories before; for example in the aforementioned Diamonds are Forever in which Bond infiltrates a secret laboratory that appears to be faking the Apollo moon landings, see: https://www.youtube.com/watch?v=Y03zBX_q4TM (See here for more details on the subject of the fake moon landings: http://hpanwo-radio.blogspot.co.uk/2016/03/programme-179-podcast-marcus-allen.html). In Spectre there is far more than just a hint. In the storyline, MI6 is about to be closed down because the government want to amalgamate it with an international intelligence agency called "Nine Eyes" which would use all the latest intelligence technology to monitor the entire world under a complete electronic surveillance grid; "George Orwell's worst nightmare" as one of the characters says in the script. The changeover is being managed by a youthful and obnoxious bureaucrat called Max Denbigh, codename "C"... presumably because he's a total one! "C" intends to make Bond and his colleagues "M", "Q" and Miss Moneypenny redundant. Bond's conflict with "C" is one I sympathize with totally. In any large modern institution, like the NHS in my case, especially nowadays, old veterans will inevitably find themselves being ordered about by young whippersnappers fully-loaded with academic qualifications and all the attendant pomposity, but with no experience of the job. C's objective is for all the existing national intelligence groups to become part of his new international organization. He holds a meeting in which he openly says he wants a "New World Order", with all the agencies. All of them agree to sign up except one, . A short time later a "terrorist bomb" explodes in a city centre in and the viewer is left in no doubt that this is a false flag attack carried out by C, meant to act as a warning to the country and punishment for not joining his "Nine Eyes". This is an astonishing new element which is growing in cinema generally, with movies like V for Vendetta and Hitler- the Rise of Evil. I never expected the James Bond films to follow suit. Predictably it turns out that C is really working for SPECTRE. Previously portrayed as a mere organized crime family, in this movie it plays a role that is similar to the Illuminati, having secret meetings in Rome and with its own people in covert positions, like C, and with a long term geopolitical agenda. It also has the power to censor Google Earth. SPECTRE's headquarters lie inside a volcanic crater, like they did in You Only Live Twice, but this time it is in the middle of the not Japan. However it can't be seen online by ordinary internet users. There are other themes such as the use of nanotechnology in the form of miniscule robots that Bond has injected into his bloodstream by Q... Goodness knows what C planned to do with them! There's a clear message in the story about the potential for abuse when it comes to sophisticated electronic advancement. I wonder who gave Spectre's production team the idea to include these plot devices into the film. Are they trying to give us clues to make the viewer think alternatively, without making it too obvious that they're doing it? Why not? Lots of other people in the media and the arts are currently doing so.
See here for background: http://hpanwo.blogspot.co.uk/2007/11/this-is-drawing-done-by-my-12-year-old.html.
And: http://hpanwo-radio.blogspot.co.uk/2015/12/programme-165-podcast-pippa-king.html.
And: http://hpanwo-voice.blogspot.co.uk/2015/02/swedish-office-microchips-staff.html.
And: http://hpanwo-voice.blogspot.co.uk/2015/06/youve-been-mangod.html.
Posted by Ben Emlyn-Jones at 19:33