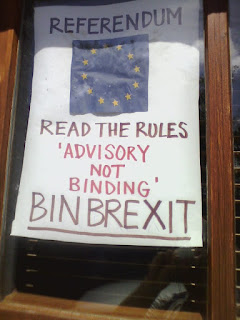 On the subject of the European Union referendum, I have not written anything in the immediate run-up and aftermath of it, but my coverage is extensive on HPANWO TV and Radio. The links to it are listed below in chronological order.
See: http://hpanwo-tv.blogspot.co.uk/2016/06/vote-leave.html.
And: http://hpanwo-radio.blogspot.co.uk/2016/06/programme-193-podcast-eu-referendum.html.
And: http://hpanwo-tv.blogspot.co.uk/2016/06/vote-leave-2-count.html.
And: http://hpanwo-tv.blogspot.co.uk/2016/06/brexit-reality.html.
The poster you see above is on display in the window of a house in a residential area of that is populated almost exclusively by REMAIN-supporters. There has also been a petition calling for the EU referendum result to be declared void because the turnout was less than 75 percent and LEAVE won by less than ten points. The rules of the vote do not specify a minimum turnout nor qualify the outcome on how unanimous it is; however this hasn't stopped 2.7 million people, minus seventy thousand fraudulent signatures, signing to demand the rules are changed retrospectively because they didn't win... I'm going to try that with the National Lottery! As I say in the bottom link above, David Lammy MP for Tottenham, has endorsed these sour grapes, as have the pathetic household in who taped up that ridiculous poster in the picture. Basically they want to undo the entire spirit of the referendum because of a legal technicality. As I've said, they are literally correct, but to consider seriously such a move is politically impossible. Even Cameron has consistently ruled it out. And how long would we keep having referendums? Until 60% or 70% vote either way? Under these criteria the rules can change so much that we will go on voting forever. The fact is, one side has to win and the other has to lose; and LEAVE has won, end of. This shows that the REMAIN side consists of people who are totally divorced from reality and feel contempt for the rights and will of the British people. Imagine what they would say to us if REMAIN won and we whined about it: "Suck it up, guys! Get in your white vans and keep on driving!" No, Parliament cannot fail to ratify this referendum without opening the doors to overt dictatorship. Yes, they will try to reverse the decision the British people have made, but they will do it by much more devious means, as they already have in other countries. As of now, I predict that there will be a discussion to amend Article 50 of the Lisbon Treaty to prevent other nations from following the Brits' example and leaving the EU. Along with the resignation of David Cameron, the opposition is also in turmoil. Most of Jeremy Corbyn's shadow cabinet have resigned and Hillary Benn has been sacked for allegedly being the ringleader of a circle of rebels who want a vote of no-confidence in the old socialist leader after his supposed mishandling of the Brexit issue. I suspect that they are simply using this as another opportunity to try and unseat Corbyn. There has been an internal war raging in the Labour Party since Corbyn's election as leader last year, see: http://www.bbc.co.uk/news/uk-politics-eu-referendum-36638041. At the same time Nicola Sturgeon, the First Minister of Scotland, is pushing for another referendum for independence from the . I can't see how anybody can stop her because the Scots are very pro-EU and as a nation taken alone voted overwhelmingly for REMAIN, see: http://www.bbc.co.uk/news/uk-scotland-scotland-politics-36643385. It's good that politics has suddenly become exciting again! Who knows what will happen in the weeks and months ahead.
Posted by Ben Emlyn-Jones at 17:20

We don’t have waste time and energy about getting “Article 50 action” going – not if we want a quick Exit! . We are all being deliberately diverted away from the truth about the Legal Quick Exit Route which has been enshrined in Law since 1965 – yes, that’s right – 8 years before we joined the EEC. It’s called an “Emergency Order In Council” – and the current metro-Elite and brown-nosing “Sir Humphreys” would much rather that the Electorate doesn’t know about it! The referendum is purely “Advisory” and not legally binding. The Laws will not change quickly, – unless the Electorate forces the political Elite to ask for an Order In Council to repeal the “1972 European Communities Act, as Amended” which is the “enabling Legal Instrument” for everything EU-related which followed it.
Under arrangements made to cope with a devolution of government administration to the 6 Regional Seats Of Government during a possible nuclear war involving an attack on the UK , – AND NEVER ALTERED SO THAT THEY ARE STILL THE LAW OF THE LAND; – all that is required is a Quorum of 3 Privy Councillors, and the Lord President Of The Council, and Her Majesty at the end of phones in a conference call. “The Order gains legal force and effect the minute after Her Majesty approves it”, – down the phone*. [* This process was originally designed to allow very quick decision making and authorization during an Soviet attack on the UK which might drive the Government and the Crown to evacuate out of London].
The Establishment – which is now deeply involved in “damage control” – would rather that the Electorate was not aware that the Severance process could be so quickly managed. All the civil servants, political figureheads, Lawyers and Lobbyists who derive all- or part- of their incomes from EU-related activities/Associations/Groups or Quangoes – would scream at being excluded from the process – because that would take work out of their hands; – but they should be ignored, when the EU is bleeding Britain dry at the rate of GB£Millions per hour!
If that GB£18.2 Billion annual figure is correct – that is another GB£36.4 Billion of YOUR money that will be paid to the EU while the metro elite and their lawyers and civil servants, and lobbyists waffle – and why would they worry? It won’t be coming from THEIR bank accounts!
Turning-off the “Money Valve to the EU” is the most urgent matter of all!

Secret are told only to the people who are ready to be part of the waves,
winning the lottery is divine, but you have to strive to all the perfection
to win the lottery, winning the lottery is one of the best thing in life, i
am a lottery winner, but before i fall into the light , i have some very
bad experience in playing the lottery, because my life was at stake, then
lottery seems to be the only means that come into my head, i played the
lottery steadily over 3 years , but i could not win more than $600, but i
always see people winning millions of dollars, so with that i extended my
search for victory , then i found Dr.Fabo a powerful voodoo Dr. who
promise to help me win the lottery. Although i was directed to him by one
successful old lottery winner who i trust and look up to for secret behind
winning the lottery, i contacted Dr.Fabo and he did his normal work for me
and finally i won the lottery,$35,000,000.00. I am happy today because i
am a millionaire, and every mature minded human should use this method to
win the lottery as well. contact
:http://drfabospelltemple.wixsite.com/website, and Email:
Drfabospelltemple@gmail.com. Good Luck