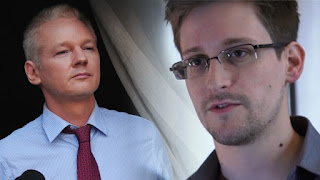 The creator of Wikileaks Julian Assange has been living permanently at the Embassy of Ecuador in for over three years at the time of writing. The only fresh air and sunlight he gets is from the balcony on the first floor offices of the embassy at in Knightbridge. He cannot leave otherwise he'll be arrested for the reasons I discuss in the background links below. His confinement has taken its toll on his health and in this recent interview on RT he appears to have aged far more than he should have during the last thirty-eight months, see: https://www.youtube.com/watch?v=Ztai31ZpTCk. He has just published his new book The Wikileaks Files, see: http://www.versobooks.com/books/1931-the-wikileaks-files. He discusses several subjects during the half-hour interview. It was recorded just before the election of Jeremy Corbyn. Quite unexpectedly, he states how doubtful he is that Corbyn can resist inevitable attempts to remove him from his position. He also says: "If Corbyn cannot be kicked out through political destabilization..." he might face "something worse." meaning threats to his physical safety and life- assassination in other words. This is what I've always believed too, but I never thought somebody like Assange would say it on mainstream TV, see: http://hpanwo-voice.blogspot.co.uk/2015/09/the-corbinator-wins.html. However, should be trust Julian Assange? It's very naive to accept his word just because of his fugitive status. The way he has had access to fame with so little obstruction ought to ring alarm bells. There's even been a movie made about him. Assange will not mention 9/11 as being anything other than what the official story says it is. Has Assange been compromised? If so presumably he's not been bribed; a three-year stay at the Ecuadorian Embassy is hardly an attractive incentive to betray one's cause. However he might have been threatened; his ex-wife and daughter apparently went into hiding a few years ago because of death threats. Has somebody found them?

At about the same time, that other renowned renegade Edward Snowden has made the news relating to the UFO cover-up. The Daily Express reports that "UFO chasers" are hopeful that Snowden is about to reveal the truth about the UFO conspiracy in order to trigger Disclosure with a capital D. This is because of a statement Snowden made on the StarTalk radio show hosted by the well-known skeptic Neil deGrasse Tyson. Snowden speculated on what would happen if aliens on other planets tried to make contact with us by sending us radio signals, see: https://soundcloud.com/startalk. He says that we would not be able to decode anything electronic they transmitted because it would be too unlike our own systems. This led researcher Corey Goode to suggest that documents on said aliens have been taken by Snowden, have been decrypted and will soon be released during one of the ex-NSA officer's massive document dumps. Scott Waring, editor of the website UFO Sightings Daily, said: "Finally we hear Snowden talking about UFOs and aliens; it's what we have all been waiting for. Snowden is a hero. I hope some of his documents will reveal some alien info soon." I think that's reading too much into Snowden's words and we should not hold our breath. Source: http://www.express.co.uk/news/science/608711/Will-NSA-whistleblower-Snowden-release-proof-of-alien-visitations-to-Earth. Unfortunately we've heard about Snowden's supposed UFO files before and it turned out to be an empty promise, see background links below. In the latest Richplanet TV programme presenter Richard D Hall states that he is absolutely certain that Julian Assange, Edward Snowden and their collaborator Chelsea Manning are all cointelpro. He says in the show that if we believe that those three are genuine whistleblowers then we'll "believe anything!" He talks about the trio of statues depicting Assange, Snowden and Manning recently unveiled in in homage to their supposed contribution to freedom. Richard says: "If you ever visit , take your dog with you so it can piss on these statues!", see: http://www.richplanet.net/starship_main.php?ref=208&part=1. I'm not as convinced as Richard is that Assange and Snowden are just actors. He might be correct, but I'm only fifty-fifty over what he said on the above episode of Richplanet TV. Richard says that is simply playing its part in the scripted deception; but in fact is not currently behaving as an obedient client state to the New World Order; and there is a covert war being waged against it as we speak, see: http://hpanwo-voice.blogspot.co.uk/2015/02/you-really-dont-like-russia-do-you.html. Manning is still in prison, but I wonder if the other two have done a deal with their pursuers, Snowden in particular. If he has a cache of information that is so sensitive that they effectively act as covering fire for him, a "kill me and these files hit the internet!" situation; then they may well be UFO related. Whatever they are they are so explosive that they've allowed him to manoeuvre the government into striking a reluctant deal, perhaps with the help of Vladimir Putin as part of his own wish to protect his country. We shall see.
See here for background: http://hpanwo-voice.blogspot.co.uk/2012/08/julian-assange-at-ecuador-embassy.html.
And: http://hpanwo-voice.blogspot.co.uk/2014/01/edward-snowden-ufo-disclosure.html.
Posted by Ben Emlyn-Jones at 17:36