Julian Assange at the Ecuador Embassy 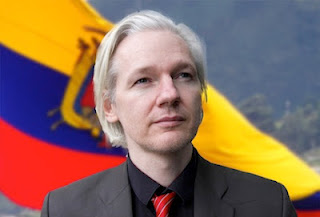 One of the main news stories at the moment is that Julian Assange, founder of Wikileaks, is trapped at the Embassy of Ecuador in . See: http://www.bbc.co.uk/news/uk-19310335 That country has granted him political asylum. The only problem is that he has to leave the Embassy to travel to and the British Government does not recognize Assange's claim, so they will arrest him if he sets foot outside the building. He's like a mediaeval fugitive seeking sanctuary in a church.
It's interesting that these false allegations made against Assange are sex offences. What better to discredit his name? Funny how the same thing happened to Roman Polanski. He was prosecuted for having sex with a girl a﻿ few months below the age of consent in 1977!﻿ This case didn't kick off until 2009 while he was filming The Ghost, a film which was a satire of Tony Blair, see: http://hpanwo-voice.blogspot.co.uk/2010/07/roman-polanski-not-to-be-extradited.html and: http://hpanwo-voice.blogspot.co.uk/2010/04/ghost-writer.html Coincidence? No way! The problem with sex offences, and therefore the reason the authorities have chosen this type of crime to try and pin on him, is that in this day and age, society is under enormous pressure from Cultural Marxist ideas like feminism. This means once this accusation is made it's extremely difficult to wash off; a man can't possibly be innocent of rape... can he?
As is often the case though, there is another side to this story. We must be wary in case the situation we're witnessing here is not just some massive bluff. Questions have been raised over the integrity of Julian Assange and it's possible that he's controlled opposition; I know many people who are convinced on this. Here's another couple of article about him: http://theintelhub.com/2011/01/22/wikileaks-is-the-cognitive-infiltration-operation-demanded-by-cass-sunstein/ and: http://unidentifiedflyingmedia.posterous.com/thoughts-on-assange-and-ecuador I'll be watching this story closely and examine all the different aspects to it. The official story, the hidden story and the "alternative hidden" story too, because the first layer of the alternative can be targeted for manipulation every bit as much as the official.