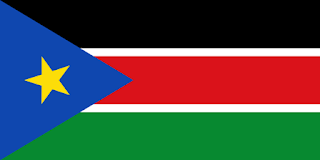 Today marks the Independence Day for a new country, South Sudan. After a civil war that has been raging on and off for over 50 years, yes five-oh, the government of Sudan has agreed to secede a large portion of its southern territory to an independence movement. The above is the flag of the new country and it was raised at midnight in Juba, the new capital, by Salva Kir Mayardit, the new president. There was some celebration, resembling the New Year street parties in London, with a countdown clock etc. The new national anthem was solemnly played on TV and on loudspeakers across Juba. This moment, it is hoped, will end the war in which over 2 million people have died.

I wonder how long the honeymoon period will last. South Sudan is one of the poorest and least-developed countries in the world. Standards of living are squalid even by Sudanese standards, which in themselves rank low internationally. A baby born in rural South Sudan has less than 1 chance in 10 of seeing his or her first birthday. History has shown that this kind of partitioning can create more problems than it solves. Almost all artificially-partitioned countries on Earth in history have descended into their own civil war: Northern Ireland, Pakistan, Cyprus, Bosnia and others. Partitioning inevitably leaves groups on one side who are majorities on the other but minorities on their own side. It only takes a single bombing or shooting somewhere... and they’re off!

The war in Sudan is part of a disturbing ongoing trend. It’s as if there’s a covert global policy that says: “All countries where oil deposits are found have to start a war, or at least diplomatic strife, in that area.” This rule has been obeyed with utter subservience in most places; from the Falkland Islands to Darfur, the Arabian Gulf of course, and now South Sudan. The conflict over the miniscule island of Rockall, which I satirize in my novel Rockall (See: http://hpanwo-bb.blogspot.com/2009/02/rockall-chapter-1.html), is all fuelled by the natural gas reserves in the area. So far nobody has gone to war over Rockall, but with the fossil fuel supplies dwindling, or appearing to dwindle, who knows?

Here is the proof that Sudan and South Sudan are obeying the rule. Just look where the oil fields are!: