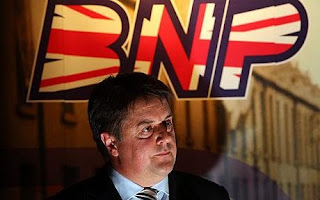 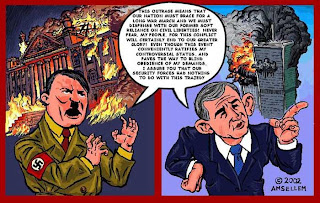 I’m not a supporter of the British National Party, but I often watch their TV channel and listen to their radio shows because they occasionally contain good information. I’ve written a more detailed analysis of the BNP here: http://hpanwo.blogspot.com/2008/11/british-national-party.html , here: http://hpanwo.blogspot.com/2010/01/stop-immigration-world-government-now.html and here: http://hpanwo.blogspot.com/2007/11/bnp-and-david-irving-at-oxford-union.html .Very strangely the Party has recently produced two TV casts that contain very conspiratorially-aware information when up till now it has shown only slightly more nous than the mainstream parties. The first one is this: http://bnptv.org.uk/2011/02/circumstances-will-play-into-british-national-party%e2%80%99s-hands/ in which, at 13.50, Nick Griffin reveals his views that the Pearl Harbour attack, the Lusitania and the USS Maine incidents were in some way due to government collusion. This means Griffin is now in the ranks of 9/11 Truthers, albeit on a “weak LIHOP” basis. 9/11 Conspiracy Theories fall into two categories called the “weak” and “strong”, also known as “LIHOP”- Let It Happen On Purpose and “MIHOP”- Made It Happen On Purpose. The LIHOP theory is supported most notably by Michael Meacher MP and it asserts that the US Government knew Bin Laden and Al-Qaida were planning to attack America in advance and deliberately stood aside and allowed them to go ahead because of the advantages it gave them. This is what I myself, and Griffin too now, think about Pearl Harbour. The MIHOP theory is the 9/11 theory I think is true, and it states that Bin Laden and Al-Qaida weren’t involved in 9/11 at all and that it was a false flag attack originating solely from inside the borders of the United States. Remarkably, and ironically, Griffin discusses the English Defence League at 12.43, describing his views on how he believes they are a government front, and I agree too. They’re a very shady group run by a businessman of dubious character. The irony comes from the implication that he himself and his own party is not a part of this controlled opposition. He also fails to tell us that the staged enemies of the staged EDL are also controlled opposition, Islam4UK, see: http://hpanwo.blogspot.com/2010/01/muslim-clerics-are-they-shills.html

Here’s another video of a speech by the head of BNP’s youth section, Kieran Trent: http://bnptv.org.uk/2011/02/british-national-partys-%e2%80%98resistance%e2%80%99/ He also refers to the EDL at 4.30 and fails to make the logical connection just like Griffin does. My jaw dropped at 9.24 when Trent mentions that one of his favourite films is V for Vendetta! It’s one of mine too! If Trent likes V for Vendetta and yet is in the BNP then I think he’s missed the entire point of the movie, but I get the feeling that this young man has a quite promising level of awareness. He has the potential to really wake up. Good luck to him.