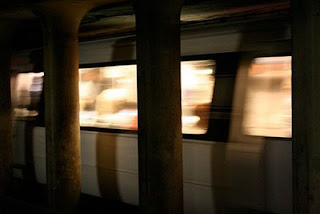 I’ve had another sighting of a strange phenomenon that could be a ghost or something similar! It took place when I was on a train last Thursday evening on my way home from visiting "Ustane", a woman I've shortly begun a relationship with, in Nottinghamshire.

I was feeling very drowsy and a lot of hypnotizing, loud vibration was coming from the carriage I was in. Hence I was lulled into a kind of half-sleep in my seat and that’s when it happened. I caught sight on an entity reflected in the carriage window. It was dark outside and the train’s interior was well lit so it was reflected very strongly, if not completely clearly, and with the inevitable distortions that window reflection causes. It looked like a large man with a bald head, or very thin hair. He was wearing a white, long-sleeved garment like a steward’s jacket. Unfortunately because I was in a half-sleep state I couldn’t move my gaze or focus my eyes, so I couldn’t make out any other details. I could see that the reflection was coming from a real object which lay in my peripheral vision, but I was stuck staring fixatedly at the same spot, the window. It’s hard to say how long this experience lasted, but it must have been a few minutes or so. The entity didn’t move or make any sound; he just stared at me. He was standing in the aisle between the two rows of seats, four rows (about ten feet) ahead of me. I felt no vibes of love or positive feelings from him, but I felt no hostility either. I just felt that he was studying me very carefully but dispassionately. When I snapped awake he instantly vanished. I looked around me but he was nowhere to be seen. This incident happened at about 8.30PM on the journey between the stations of Derby and Birmingham New Street. When I returned to Nottinghamshire the following week I told Ustane about my experienced and she gasped. She ran upstairs and brought down her photo album. She pointed to an old black-and-white photo and asked: "Is this what you saw?" I said "Yes; or something very similar." The photo was of a man behind a pub bar weraing a white stewards' jacket. "That's my dad." she said. "He died in 1988."

I must stress that I'd never seen this photo or been given any description of Ustane's father before that time. Well, if what I saw on the train was Ustane's father it explains his interest in me! Like any dad, he wants to know what kind of blokes his daughter is associating with. I hope I met with his approval!
Posted by Ben Emlyn-Jones at 21:24