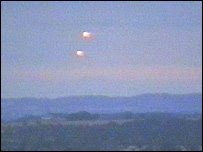 The Ministry of Defence has declassified another wave of UFO files. You can download them from the National Archives here: http://ufos.nationalarchives.gov.uk/ . There are 19 in this batch and they cover the period between 1986 and 1992.

As always these make interesting reading, although they lack any significant overall analysis or conclusion. However such analysis may well exist, but remains classified. I saw Nick Pope on GMTV this morning. He’s a man I met at the Now That’s Weird Conference in June where I talked to him extensively and reviewed his speech here: http://hpanwo.blogspot.com/2008/06/now-thats-weird-conference-2008.html . He had a tough time with Jon Stapleton and Fiona Philips; Fiona said “Well I don’t believe a word of it, but I suppose we should keep an open mind.” Nick replied: “I’m not saying for certain that we’re being visited by aliens, only that some UFO’s cannot be explained away by down-to-Earth means; they exhibit speeds, manoeuverability and behavior that no man-made aircraft could.” The newly-released reports include several close encounters with commercial aircraft in Kent and Northern Ireland. The Kent incident is particularly alarming because it was reported by an airliner flying low over Lydd that nearly collided with a “brown missile”.